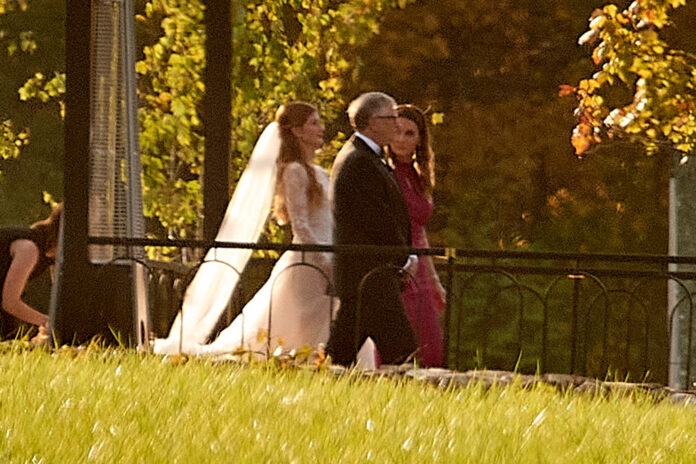 Bill and Melinda Gates walked with their daughter, Jennnifer, late Saturday afternoon ahead of her lavish nuptials at her Westchester County horse farm. She reportedly had already tied the knot with Nayel Nassar in a Muslim ceremony.
The 25-year-old bride emerged in her stunning wedding gown Saturday afternoon to pose for photos with her bridesmaids.

She glowed in the dropped waist dress with a lace top, long sleeves and a full tulle skirt. Vera Wang designed the bride’s custom-made dress, according to the Daily Mail.
She was surrounded by nine attendants who wore dark green gowns, some with halter necks and at least one with sleeves.
One of the bridesmaids held up the end of Gates’ long veil as they posed for photos among the autumn leaves.

Gates wore her long auburn hair half up and half down and appeared to accent the dress with just simple earrings.
Hundreds of guests, among them Georgina Bloomberg, began arriving at Gates’ $16 million property at 3 p.m. Saturday for the lavish event.
Vans pulled up from a White Plains hotel and an inn in Ridgefield, CT.
Servers could be seen standing at the ready with glasses of champagne.

Cheering could be heard from the farm shortly before 5:30 p.m. And then the skies opened up in a rainstorm about a half hour later.
Wedding photographers captured the couple in a sweet embrace before the storm.
Workers earlier in the day wheeled in masses of hydrangeas and other plants while pastry chefs from French shop Laduree carried a large white two-tiered wedding cake.

Coldplay is scheduled to perform at today’s reception, as is folk musician Harry Hudson.
I can hear them over there now making last minute preparations,” said Linda Dupree, whose home backs onto the North Salem land owned by the bride. “I thought I heard Michael Buble singing, but it may have just been a recording. The delivery trucks have been coming down the road all morning.”

Choral music could also be heard coming from the horse farm as dozens of catering staff in black shirts and slacks walked outside the wooden barns, and U-Haul and Ryder trucks pulled into the driveway. Silver heaters and lanterns were seen waiting to be put into place.
Dupree said the main stage of the wedding, which has been under construction for the last few days, resembles “a beautiful botanical garden.”

A series of apparently newly built, interconnected, glass-covered rooms could be seen from above, including one housing rows of long white benches, and another with dozens of dinner tables of different sizes set with what appeared to be pink flowers and white dinner plates. Two rows of white hydrangeas encircled a white table at the center of the main glass wedding pavilion.