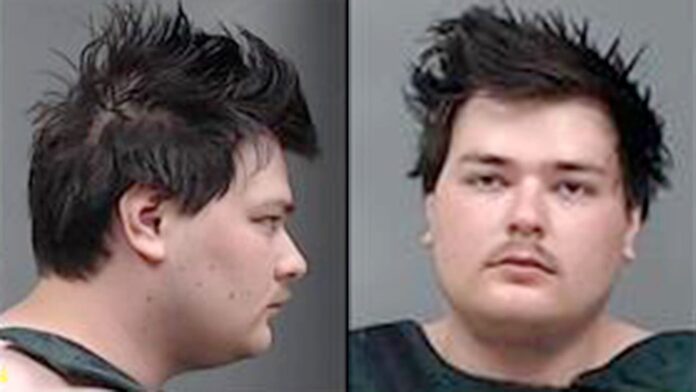 CEDAR RAPIDS, Iowa (AP) — Police in Cedar Rapids have arrested a teenage boy on suspicion of slashing his parents to death after officers found the blood-covered teen sitting outside the family home early morning.
Police said they received a call around 2 a.m.

about a suspicious person at the home, and when officers arrived they found 17-year-old Ethan Alexander Orton outside. He was covered in blood, and he told officers he had killed his mother and father.

Police then found the bodies of Casey Orton, 42, and Misty Scott Slade, 41, inside. The teen reportedly told officers he used a knife to stab them both, but later used an ax on his mother when it appeared she had survived the initial attack. The teen reportedly told police he killed his parents to “take charge of his life,” according to a criminal complaint.
The teen faces two counts of first-degree murder and will be prosecuted as an adult, the Linn County Attorney’s Office said.

Ethan Orton, 17, told Cedar Rapids police officers he killed his parents after they responded to the Orton home just after 2 a.m Thursday following reports of a suspicious person in the area, the department said. He was found sitting outside the home “covered in blood.”
“I don’t know if he was expecting the police to come. When we arrived, the officer who encountered him first described him as being calm,” Cedar Rapids Police Chief Wayne Jerman
While officers checked on Orton, the teen allegedly told them he had killed his parents.

Inside the home, the officers found the parents dead in the living room. They were identified as Casey Arthur Orton, 42, and Misty Dawn Scott Slade, 41.
Orton faces two counts of first-degree murder. The case has been filed in adult court, police said. He is being held at the Linn County Detention Center on $2 million bond.
Charges obtained by KWWL said Orton used a knife to stab his parents. He then allegedly used an axe to kill his mother when he realized she was still alive.
“Sick to my stomach. You just don’t think this kind of thing can happen, and you just don’t think it can happen in your neighborhood,” neighbor Jean Garrett told the news outlet. “And here it is in our neighborhood, and we have a nice neighborhood. It’s just really hard to process. I still remember her laughing and joking with me a couple weeks ago.”

The slaying came a month after a 20-year-old man was charged with killing his parents and sister in Cedar Rapids. Alex Jackson, a college student, initially told investigators a masked intruder committed the triple murder before he was arrested and charged.

LGBT+ festival to open in Denmark, Sweden in pandemic shadow