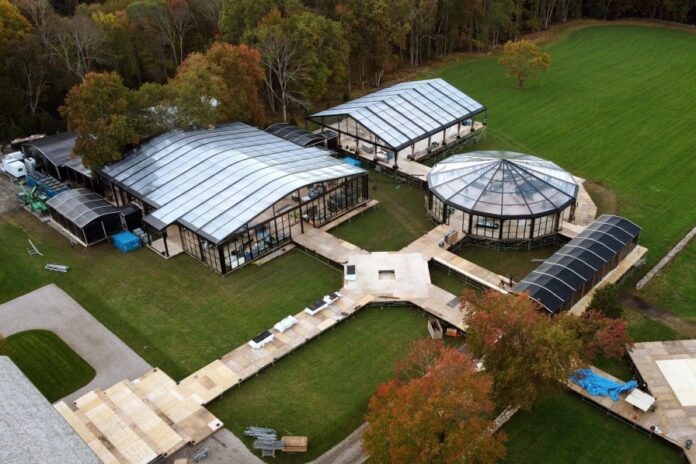 Neighbors in this most exclusive part of Westchester, including David Letterman, are not thrilled about all of the construction and disruptions on the quiet street, just off Route 116. Don’t try driving by on the big day because North Salem Police and Gates’ security detail will have most of the roads closed off, and will also try to stop any drones from flying over to photograph the Bride, Groom and the parents of the bride, Bill and Melinda Gates.

Bill and Melinda purchased the horse farm for Jennifer in 2018 upon her graduation from Standford University. Jennifer is currently an MD candidate at Icahn School of Medicine at Mount Sinai. Jennifer and Nayel met at an equestrian event.

Who will be among the 300 guests is also a mystery that the Paparazzi will try to uncover. Westchester County Airport is less than 30 minutes from the wedding site.

Both the brtide and groom were beaming when both announced their engangement. “I’m feeling like the luckiest (and happiest) man in the world right about now. Jenn, you are everything I could have possibly imagined..and so much more. I can’t wait to keep growing together through this journey called life, and I simply can’t imagine mine without you anymore. Love you more than you can possibly imagine, and thank you for making every single day feel like a dream to me. Here’s to forever!” posted Nassar.

Jennifer’s Instagram post read “Absolutely swept me off my feet this past weekend, surprising me in the most meaningful location over one of our many shared passions.”

Jennifer Gates is well liked in North Salem, where everyone tried to keep a low profile and stay out of the public eye. The Town is calling the event the biggest part we have ever seen, and others grumbling about how the Gates family is buiding a little city for the wedding.

But the Gates tried to make nice by sending out gifts of wine and vouchers for local restaurants, which appeased some of the neighbors.

Preparations for the celebration of Microsoft heiress Jennifer Gates’ $2 million nuptials reached a fever pitch Saturday, as reports surfaced that she secretly married her fiancé in a Muslim ceremony Friday night.

Authorities shut down rural roads Saturday as hundreds of guests arrived in chauffeur-driven SUVs at her $16 million Westchester horse farm to toast her union with fellow equestrian Nayel Nassar.

Workers wheeled in masses of hydrangeas and other plants while pastry chefs from French shop Laduree carried a large white two-tiered wedding cake, as they geared up for what is expected to be a second civil ceremony today, the Daily Mail reported.

The 300 guests, expected to include Georgina Bloomberg, have been gathering at the 142-acre North Salem estate where one man was seen walking in with two large boxes labeled “COVID-19 Ag Card.”

Coldplay is scheduled to perform at today’s reception, as is folk musician Harry Hudson. Vera Wang designed the bride’s custom-made dress, according to the Daily Mail.

“I can hear them over there now making last minute preparations,” said Linda Dupree, whose home backs onto the North Salem land owned by the 25-year old bride. “I thought I heard Michael Buble singing, but it may have just been a recording. The delivery trucks have been coming down the road all morning.”

Choral music could also be heard coming from the horse farm as dozens of catering staff in black shirts and slacks walked outside the wooden barns, and U-Haul and Ryder trucks pulled into the driveway. Silver heaters and lanterns were seen waiting to be put into place.

Dupree said the main stage of the wedding, which has been under construction for the last few days, resembles “a beautiful botanical garden.”

A series of apparently newly built, interconnected, glass-covered rooms could be seen from above, including one housing rows of long white benches, and another with dozens of dinner tables of different sizes set with what appeared to be pink flowers and white dinner plates. Two rows of white hydrangeas encircled a white table at the center of the main glass wedding pavilion.

The bride’s parents arrived yesterday at the sprawling $16 million horse farm that they bought for their eldest daughter after she graduated from Stanford University in 2018. It is the first time that the Gates’ were spotted together since their August divorce. The couple had been married for 27 years.

Photos showed the bride and groom posing for photographs on the lush grounds of the horse farm Friday along with Bill Gates and other family members. The bride wore a white ankle-length halter dress, her long auburn hair in a ponytail for the Friday evening ceremony.

It’s fantastic,” said Peter Van Raalte, 63, an investor who lives in nearby Briarcliff while riding his bike in the area. “Bill bought this place four years ago. How do you build something this beautiful? You can tell this is super high quality construction. Everybody should have a great wedding.”

Another resident, who lives in nearby Bedford, stopped on her bicycle to take a selfie near the property.

“It was pretty nice and quiet in this area for the animals,” said Teri Chargualaf, 41, who works at  Google. “Now it’s taken over for one day. It’s a bit extravagant. It’s a royal wedding…Two million dollars spent in one day.”

But not everyone on the tony block of mansions was a fan. Cindy McKean, 64, a psychologist who lives nearby, said she usually walks her dogs on the road near the Gates’ estate but didn’t want to stress them out with all of the excitement going on.

“I think it’s over the top,” she told The Post. “This is a quiet town. I mean they can do what they want but none of that was here before.” She pointed at the elaborate glass houses that had been constructed for the event.

Despite the security surrounding the home, residents kept showing up as guests began to arrive for lavish nuptials. “I think this is exciting,” said Karen Anderson, who drove the Westchester backroads to get a glimpse of the wedding. “This is our royalty. Royalty equals money.”

Jennifer, who is studying at the Icahn School of Medicine at Mount Sinai in New York, announced her engagement to Nassar, 30, who was born in Chicago and raised in Kuwait and California in an Instagram post last year. Nassar’s Egyptian parents, Fouad Nasser and Iman Harby, are principals in Diwan Interiors, an architectural firm based in Kuwait.

“Nayel Nassar, you are one of a kind. Absolutely swept me off my feet this past weekend, surprising me in the most meaningful location over one of our many shared passions,” Gates wrote in the caption.

Tell Pitbull where to eat while he’s in Kansas City

Man found dead in a car in Indianapolis