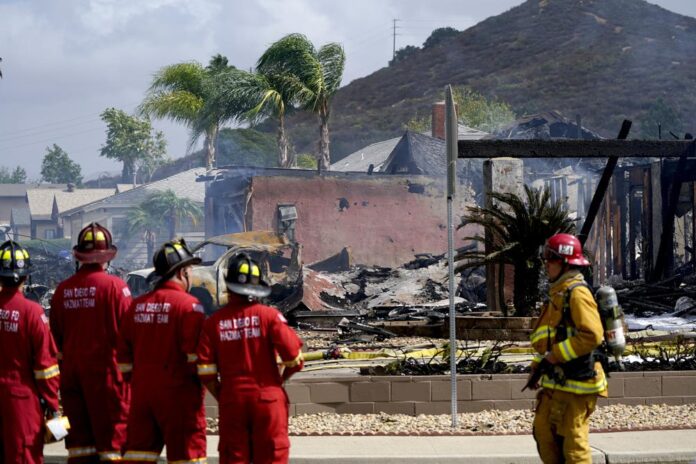 A small plane crashed in a residential neighborhood of San Diego County, damaging some homes, authorities said. In a news conference after the crash, a fireman confirmed that at least two people died in the crash.
“We know there is at least two,” a Santee fire official said. “It’s a pretty brutal scene.”

Authorities said two people have died and two more have been taken to the hospital for burn injuries. The Santee Fire Department said the injuries of the people on the plane are likely “non-survivable.

UPS confirmed that one of its drivers died in the crash, accounting for one of the fatalities.
We are heartbroken by the loss of our employee, and extend our deepest condolences to his family and friends,” the company told Fox News in a statement. “We also send our condolences for the other individuals who are involved in this incident, and their families and friends.”
The crash happened just after noon two to three blocks from Santana High School. Multiple homes caught on fire, along with at least one vehicle, authorities said.
A delivery truck and a fire hydrant were also struck, according to city officials.

The Red Cross set up a temporary evacuation point for families who were affected by the plane crash.

“I felt the impact. Things shook. I didn’t know if it was an earthquake or what,” a woman who lives near the crash site said
County officials said the plane was a twin-engine Cessna C340 that had taken off from Yuma, Arizona, and was heading to Montgomery-Gibbs Executive Airport in San Diego. It was unclear how many people were on board.
The sheriff’s office said earlier that Jeremy Street between 2nd Street and Mast Blvd and North Magnolia Avenue between 2nd Street and Mast Blvd were closed off amid an investigation.
Santana High School tw

eeted that all students were in a “Secure Campus.” It later said the sheriff’s office had given the OK for students to be dismissed.

The National Transportation Safety Board and the Federal Aviation Administration are handling the investigation. The FAA said it will release the tail number of the aircraft after investigators verify it at the accident site.
Santee is about 20 miles northeast of downtown San Diego.

Off-script Olympics: Wins, losses, and a whole lot of improv