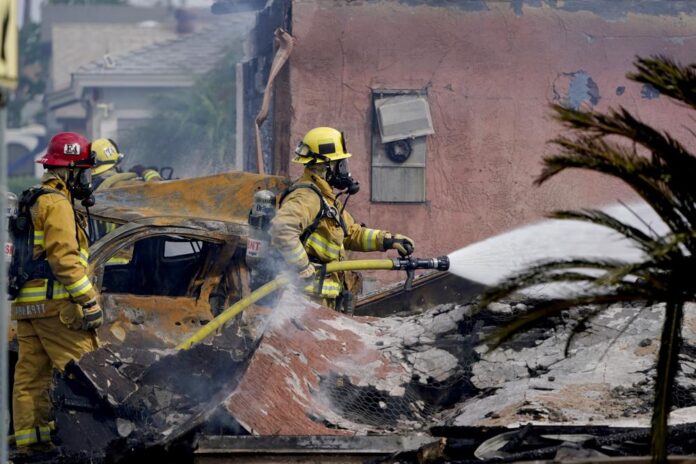 The plane was headed to San Diego from Yuma, Arizona, had some sort of issue and was attempting to land at Gillespie Field, which is near the high school, when it crashed on a nearby street at around 12:15 p.m.
According to witnesses, the plane went down along Greencastle Street where it intersects with Jeremy Streets. The wing of the plane clipped a UPS truck that was nearing a stop sign, killing the driver. The fuselage then slid toward two homes and exploded, witnesses said.

The chief medical officer of the Yuma Regional Medical Center confirmed early on Monday evening that the pilot of the plane was a colleague.
We are deeply sad to hear news of a plane owned by local cardiologist Dr. Sugata Das which crashed near Santee,” said Dr. Bharat Magu. Chief Medical Officer at YRMC. “As an outstanding cardiologist and dedicated family man, Dr. Das leaves a lasting legacy. We extend our prayers and support to his family, colleagues and friends during this difficult time.”

A family friend told NBC 7 that Das worked at the YRMC but lived in San Diego, flying back and forth frequently.
Shortly before 2 p.m. at a news conference near the crash scene, Santee Fire Department Deputy Fire Chief Justin Matsushita confirmed that at least two people died in the crash or the ensuing fire.
“It’s a pretty brutal scene for our guys and we’re trying to comb through it,” Matsushita said, adding that he was unsure if there were additional fatalities. He did say that the debris field from the crash extended nearly a block to the southeast.
In addition to the pair of destroyed homes, at least five more were damaged.
Matsushita said two people were taken to local hospitals for treatment. Neighbors told NBC 7 they are a husband and wife who were saved from the house on the corner that was struck by the body of the plane. The woman was rescued through a window, her hair singed and face burned. Her husband was rescued from the back yard, pulled through the fence to safety by neighbors.
“We do not yet know how many people were on board,” Donnell Evans, a spokesman with the Federal Aviation Administration said in an email sent to NBC 7. “The FAA will release the tail number of the aircraft after investigators verify it at the accident site. The FAA and National Transportation Safety Board will investigate. The NTSB will be in charge of the investigation and will provide additional updates.”
Officials at the site said they were unsure how many people were traveling aboard the aircraft as well, but said it was very likely anybody inside the plane was killed by the impact and subsequent fire. The Cessna C340 is a six-seat plane, according to multiple sources.
“We believe that the injuries are nonsurvivable for anyone that was on that plane,” Matsushita said.

At around 3 p.m., an official with UPS confirmed the truck that was clipped by the plane was one of theirs and said one of their drivers had died at the crash scene.
“We are heartbroken by the loss of our employee and extend our deepest condolences to his family and friends,” read a statement from the delivery company. “We also send our condolences for the other individuals who are involved in this incident, and their families and friends.”
The National Transportation Safety Board will be handling the investigation and will provide updates, Evans also said, adding that neither “agency identifies people involved in aircraft accidents.”
After the crash, which happened at around 12:15 p.m. near the intersection of Greencastle and Jeremy streets, smoke was visible above Santee and the surrounding communities. A photo tweeted out by @ouijacorn shows an inferno raging in one of the homes, a man who is possibly a neighbor standing nearby pointing a house at the raging fire.
First responders from the Santee Fire Department and the San Diego Sheriff’s Department were dispatched to the scene, authorities told NBC 7.
By 1:30 p.m., the dozens of firefighters battling the twin blazes had extinguished the fires in both structures for the most part and were just pouring water into the buildings, where a small amount of gray smoke was still visible.
Santee Witnesses Describe the Crash
Michael Keeley 43, ran barefoot outside when his home shook. He saw the UPS truck in flames and found two neighbors at a burning home calling through an open window.
With thick smoke inside the neighbors’ home and flames licking the roof, Keeley stood on a rock and reached through to grab the woman’s arm and help her climb out of the window. Her forearms were burned, and her hair was singed.
Moments later, there were explosions inside the home. Neighbors knocked out fencing to rescue the woman’s husband from the backyard.
“I’m glad I didn’t have to go inside with my bare feet,” said Keeley, a probation officer.
Andrew Pelloth, 30, was working from home when he heard a whirring and then a huge boom.

“My initial thought was that it was a meteorite coming down,” he said. “I could hear it falling and then some kind of explosion.”
Pelloth lives across the street from the retired couple and saw the house and the delivery truck engulfed in flames. Mangled ruins of vehicles were in the couple’s driveway
Erik Huppert, 57, rushed to the couple’s home after his house shook. He joined Pelloth to pull boards off the fence to save the husband, who was walking in the backyard.
The woman and her husband were burned on their arms but were still able to walk and talk, Pelloth said.
“Both were definitely in shock, but at least they were alive,” said Huppert, a military contractor.
No one was home at the other house that was destroyed, which sold only a month ago. Pelloth said he met the new owner Monday as he arrived to see the damage.
Lili Patch told NBC 7 that she and her husband were about to have lunch when they heard the plane crash.
“It felt like someone crashed into my garage,” Lili Patch said.
Patch thought it was possible the aircraft was having some mechanical issues, describing the sound she heard as a “putter.”
“You can see it come down and it just, full-force, crashed,” Patch said. “It didn’t spin, nothing. You just heard it and it came down.
Living in the flight path, a crash like this always concerns area residents.
“This is like the nightmare everybody worries about,” Patch said.
Jim Slaff told NBC 7 that neighbors pulled his mother out of a window of her burning home and rescued his stepfather from the backyard. It appears their dog died.
Slaff said neighbors told him the couple was “obviously shaken up but doing OK” and taken to UC San Diego Medical Center. “It’s a war zone. It’s not even a house,” Slaff said after arriving at the scene.
The Crash Scene in Santee
At least two homes were destroyed by fire, with crews fighting the flames with water cannons and also trying to cool down other buildings nearby. Two or three other houses were also damaged, Santee Deputy Fire Chief Matsushita said.
Several charred vehicles were also visible at the crash site, one of them apparently a UPS delivery truck that had been driven by the UPS employee. Details about that person’s identity have not yet been revealed.
A shot of the charred truck at the scene.
Matsushita said power had been cut off to 10 homes in the neighborhood while first responders worked the scene. Deputies with the San Diego Sheriff’s Department said that a temporary evacuation point was set up by the Cameron Family YMCA, which is at 10123 Riverwalk Drive, in Santee.
Hours after the crash, SkyRanger 7 flying overhead captured devastating scenes of the crash, with the two homes reduced to ashes and framing timbers, firefighting foam and wet earth surrounding both structures, the charred wreckage of the Cessna lying broken behind one of the houses. Dozens of people stood around the somber scene, most in bright-yellow vests or their firefighter turnout gear.
Officials said Jeremy Street between 2nd Street and Mast Boulevard has been closed to traffic, as has North Magnolia Avenue between 2nd Street and Mast Boulevard.
The school, which is part of the Grossmont Union High School District, is just north of the airport at Gillespie Field.
Shortly before 12:30 p.m., school officials tweeted out that no students had been harmed when the plane came down and that the campus was secured. About a half-hour later, they said the campus had been returned to its normal status and that students were either on lunch break or were being released for the day if they had no more classes.
The crash near Gillespie is not the first in Santee; three years ago, two people and a dog were killed when an aircraft came down in Santee in February. According to the NTSB, there have been four fatal plane crashes in the East County community, including the one in 2018. Six people have died in the incidents.