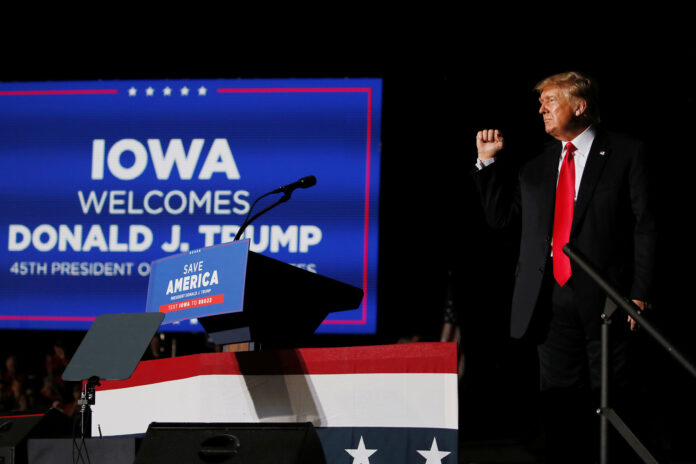 As disastrous as the Biden administration has been, no one can blame the great state of Iowa, because boy we did really — we did really good here,” he said. “Iowa, what a place.”
Trump also unveiled a possible campaign slogan for 2024 – “Make America Great Again – Again.

His approval ratings in Iowa are higher now than when he was in the White House.

Fifty-three percent of Iowans said they view Trump favorably, compared to his 48 percent rating when he was in the White House, a recent Des Moines Register/Mediacom Iowa poll shows.
Biden, on the other hand, has a 37 percent favorable rating in the poll and a 61 percent unfavorable rating.
Trump also continued to air his complaints about how the 2020 presidential election was rigged and urged Republicans to get the vote out for the 2022 midterms, in which the GOP is expected to win back control of the House and Senate.​
“We must send the radical left a message they will never forget,” he said.

In Robinhood’s stock debut, a tumble and then sharp swings

Man has died in a house fire in Albuquerque

3 dead, including one suspect, in a mass shooting in Jacksonville Landing