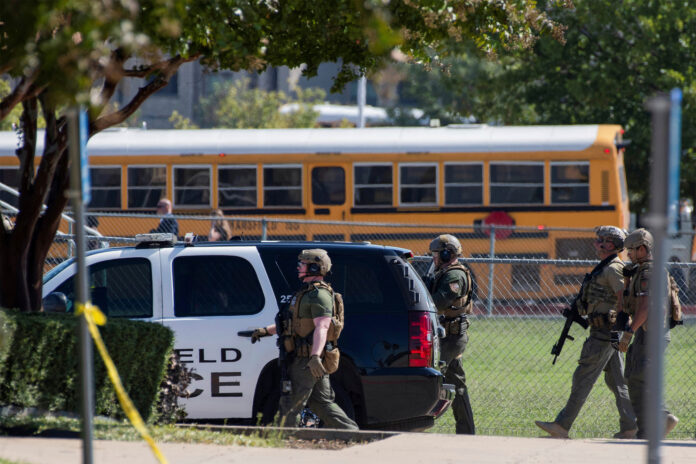 The US has experienced a higher number of school shootings at the start of this school year compared to any other year the incidents have been tracked.

And an increasing number of the attacks, such as one this week at a Texas high school that left four people injured, are tied to fights between young people.

Since the beginning of September, the country has experienced 64 on-campus gun incidents, including 23 attributed to escalations of disputes, according to a K-12 school shooting database from The Center for Homeland Defense & Security.

“As kids have returned to school, a lot of the violence is representative of increases in gun violence we’re seeing across the country,” he added.

More than 50 incidents have been attributed to escalations of disputes so far in 2021, compared to 23 for the pandemic-disrupted 2020 calendar year and 49 in 2019.

Where school shootings are often thought of in terms of planned attacks, such as the 1999 Columbine High School massacre or the 2018 Marjorie Stoneman Douglas High School mass shooting, in which gunmen went through several locations indiscriminately targeting victims, the recent uptick in on-campus shootings has been fueled in large part by random acts of violence.

A week prior, on Sept. 30 in Memphis, Tenn., a 13-year-old boy shot another student during a fight in the stairwell of their school as morning classes were taking place.

The victim in that shooting, also 13, suffered a gunshot wound to the abdomen and is expected to recover. The suspect, meanwhile, fled school grounds and later turned himself in after a police search.

That shooting followed one on Sept. 20 in Newport News, Va., in which police said a 15-year-old boy pulled a gun from his waistband and fired multiple shots at another student when a fight broke out in the main hallway of their high school.

In addition to instances where students suddenly pulled firearms during fights, some of these shooting incidents have also been tied to gangs, Riedman said.

For instance, authorities blamed gang rivalries at a south Los Angeles high school for a shooting during a brawl there on Sept. 2 that left a 17-year-old student injured.

An attorney speaking on behalf of Simpkins, the accused Timberview gunman, tried to make the distinction at a press conference that the incident wasn’t a “standard issue school shooting.”

“There are numerous school shootings that have occurred across this country which are tragic. All school shootings are tragic,” civil rights lawyer Kim T. Cole said. “However, in this situation, this was not someone who was just out to go and shoot a school and had made up their mind [and said,] ‘You know hey I’m upset and I’m just going to shoot anyone I see.’”

Experts and officials, however, say regardless of a shooting’s cause, the incidents can have traumatic effects for students.

“These isolated incidents still have profound impact on all students and schools,” Riedman said.

A teacher at Timberview High School, for instance, detailed to The Post how his students were forced to barricade their classroom door when the shots rang out, and how some were left in tears during the lockdown that followed.

The superintendent of Newport News Public Schools in Virginia, George Parker, also described how upsetting the shooting there was for students and staff.

The troubling trends emerging from the K-12 school shootings database stats are paralleled by data maintained by the nonprofit Everytown for Gun Safety, which counted 30 instances of gunfire on school grounds between Aug. 1 and Sept. 15 that left five people dead and 23 wounded.

It was the largest number recorded in that same period since the organization began tracking gunfire on school grounds in 2013.

It could take years for researchers to determine why more young people are apparently bringing and firing guns on school grounds, but experts believe the trends follow similar societal patterns that have been attributed to a range of causes, including the toll of the coronavirus pandemic and an increase in firearm purchases.

“We’re just in that trend now and it’s difficult to come up with an explanation,” Riedman said. “What we do know is across every demographic and region there is increasing gun violence bleeding over to school campuses.