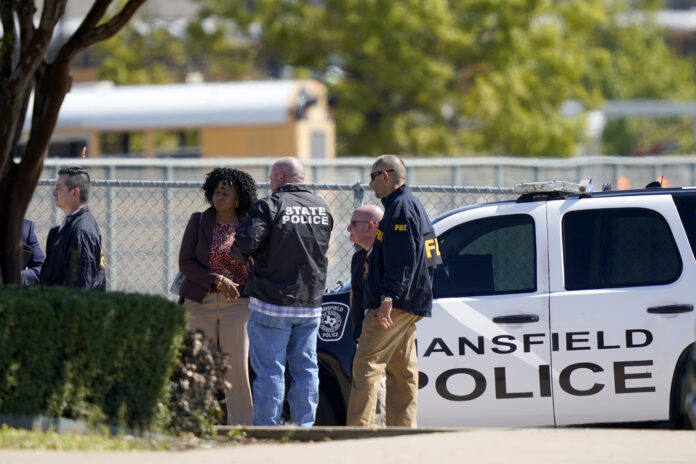 Students at an Arlington, Texas high school jumped into action when shots rang out there at morning — turning off the lights and barricading their classroom doors.

Dale Topham, a visiting early college history teacher at Timberview High School, described the moment he heard “crashing noises” coming from across the hall in the middle of his lesson on the Revolutionary War.

“All my students instantly recognized the sound and said ‘gunshots,’ turned off the lights, and hid behind desks,” Topham recalled to The Post.

One student tried to lock the door, but when that didn’t work, the group of 15- and 16-year-olds immediately pushed a bookshelf, desks and chairs against it instead.

Then, “We hunkered down and waited for what felt like forever,” Topham said.

Students comforted each other as they hid, and “instantly” got on their phones to let their parents know they were OK, the teacher added.

“A couple were emotional and had their friends rushing over to them hugging them,” Topham said. “Most of the students handled it really well.”

Many were also exchanging messages in an attempt to figure out what had taken place.

Police said Timothy George Simpkins, 18, pulled out a gun at around 9:15 a.m. after getting into a fight with another individual in a classroom. Four people were injured, including two who suffered gunshot wounds.

The school was placed on lockdown, during which time Topham posted a photo showing the makeshift barricade his students stacked against the classroom door.

Eventually, after the group spent about 30 minutes sheltering in place, a police officer came by to tell them to stay put as cops searched for the shooter, Topham said.

A while later, the same officer returned to let the class know authorities would soon be evacuating the campus.

Topham, who also teaches at Tarrant County College, said he’s been through drills, but never a school shooting before.

“I was trying to process the fact that it was gunshots, not desks flying,” Topham said, adding that for his students: “It was clear that they were well trained, knew exactly what to do.”

His students were evacuated and bussed to a reunification area at the Center for Performing Arts to meet up with their parents.

Topham said he did not know the suspect, who turned himself in to a police station with his lawyer hours after the incident.

The shooting came just days after gunfire at a Houston charter school injured an administrator.

The state’s deadliest school shooting occurred in May 2018 when a then-17-year-old armed with a shotgun and pistol at Santa Fe High School fatally shot 10 people, most of whom were students.

The Latest: Virus rules in Seoul extended another month

Woman Killed After Car Crashes into Tree, Bursts Into Flames On Roosevelt Boulevard