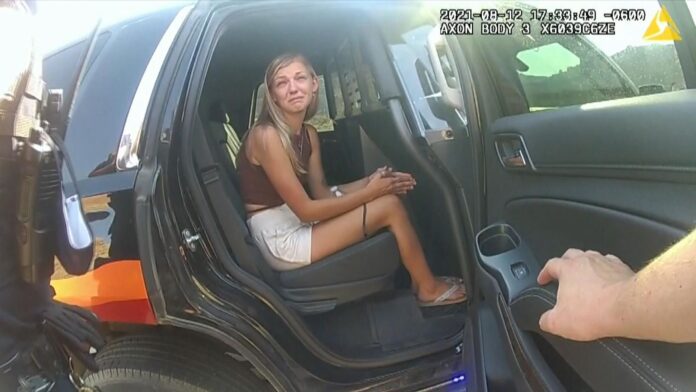 Police release video footage from August which shows Petito telling officers that, while her boyfriend had hit her, she had hit him first.
Gabby Petito, a 22-year-old blogger whose body was found in a national park, told police about a domestic dispute with her boyfriend the month before she disappeared.
Ms Petito was found dead in Wyoming on 18 September and police are investigating her death as a homicide.
Her boyfriend Brian Laundrie, 23, was charged last week with fraudulently using her bank card, although he has not been charged in relation to her death. He has been missing since 14 September and is a person of interest in her disappearance.
Police have released video footage from August which shows Ms Petito telling officers that, while Laundrie had hit her, she had hit him first.
In the 52-minute video, she said: “To be honest I hit him first. I slapped him a couple of times.
“I guess yeah but I hit him first. He grabbed my face like this. He didn’t hit me in the face or anything. He grabbed me with his nail and I think that’s why I have a cut right here. I can feel it, it really burns.
The couple had been driving through the western states of the US in her Ford transit van since June, documenting their trip on social media.
They were pulled over by police in Utah on 12 August after a complaint about a domestic disturbance.
Both were questioned separately but neither of them were charged and a police officer separated them for the night.
Ms Petito’s family reported her missing on 11 September, 10 days after Laundrie returned home from the trip without her.
A lawyer for the Petito family, Richard Stafford, has called for Laundrie to turn himself in, criticising the young man’s parents for a lack of cooperation in the search that found Ms Petito’s body.
“The Laundries did not help us find Gabby, they sure are not going to help us find Brian,” Mr Stafford said. “For Brian, we’re asking you to turn yourself in to the FBI or the nearest law enforcement agency.
The Laundrie family has denied helping him to flee.
Earlier in the week, Ms Petito’s father Joseph called for all missing persons cases to be treated equally
He was responding to claims that the coverage of his daughter’s disappearance was a prime example of “missing white woman syndrome”, while others who disappear get far less media coverage.
“I want to ask everyone to help all the people that are missing and need help. It’s on all of you, everyone that’s in this room to do that,” he said, pointing to reporters and cameras in front of him.
“If you don’t do that for other people that are missing, that’s a shame, because it’s not just Gabby that deserves it.”

Police: Suspect in killings of Houston family killed himself

Virginia woman fatally shot by passenger in her car