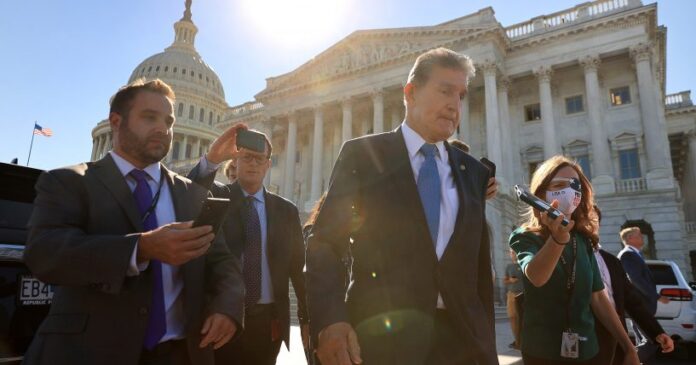 Sen. Joe Manchin (D-W.Va.) issued a statement reiterating his opposition to President Joe Biden’s $3.5 trillion reconciliation bill, saying, “At some point, all of us, regardless of party must ask the simple question – how much is enough?”

Democrats are attempting to enact the bill through a process called budget reconciliation due to Republican opposition. Every Senate Democrat would need to vote “yes.
The outlet points out the bill includes funding for everything from Medicare expansion to free community college.

Manchin said in a Wednesday night statement, “Every Member of Congress has a solemn duty to vote for what they believe is best for the country and the American people, not their party. Respectfully, as I have said for months, I can’t support $3.5 trillion more in spending when we have already spent $5.4 trillion since last March.”

He argued spending trillions more on more government programs “when we can’t even pay for the essential social programs, like Social Security and Medicare, is the definition of fiscal insanity.
Manchin continued, “Proposing a historic expansion of social programs while ignoring the fact we are not in a recession and that millions of jobs remain open will only feed a dysfunction that could weaken our economic recovery. This is the shared reality we all now face, and it is this reality that must shape the future decisions that we, as elected leaders, must make.

He suggested “the amount we spend now must be balanced with what we need and can afford – not designed to reengineer the social and economic fabric of this nation or vengefully tax for the sake of wishful spending.
Recalling his proposal in August to “take a strategic pause,” Manchin explained the country needed to “develop the right policies and to continue to monitor how the pandemic and economic factors are affecting our nation’s fiscal situation before we spend more.”
While he expressed hope that “common ground can be found,” Manchin made it clear he “cannot – and will not – support trillions in spending or an all or nothing approach that ignores the brutal fiscal reality our nation faces.”

Concluding his statement, Manchin said, “America is a great nation but great nations throughout history have been weakened by careless spending and bad policies. Now, more than ever, we must work together to avoid these fatal mistakes so that we may fulfill our greatest responsibility as elected leaders and pass on a better America to the next generation.”

Despite a meeting with the president earlier this month, Manchin stood his ground on his opposition to the spending package.

Two votes and coalition talks: How the German election works