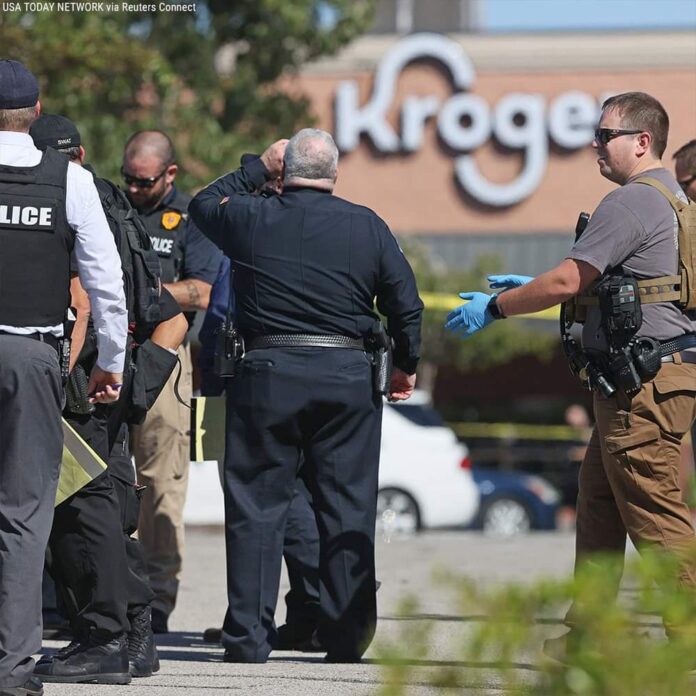 A shooter killed one person and at least a dozen others were injured inside a grocery store in Tennessee, officials said.
The shooting happened at a Kroger grocery store in Collierville, a city about 25 miles east of Memphis, about 1:30 p.m., police said during a news conference broadcast. The shooter died from a self-inflicted gunshot wound, police said.
Collierville Police Chief Dale Lane said officers flooded the grocery store within minutes of the shooting and began going aisle to aisle in search of shoppers and employees.
“We found people hiding in freezers and in locked offices,” Lane said. “They were doing what they had been trained to do — run, hide, fight. I hate that we had to do it here.
The shooter’s vehicle was found in the Kroger parking lot, and authorities were waiting for equipment to safely check the vehicle.
Lane decline to describe the type of gun the shooter used. He was found dead in the rear of the store, police said in a news release.
Glenda McDonald, a Kroger employee in the floral department, told the Memphis Commercial Appeal she heard gunfire while standing at a counter
“I just ran out the door,” McDonald told the newspaper. “I left my purse, my keys, everything.
A Kroger cashier told reporters she heard gunfire near the deli while she stood at her register and helped others to safety outside the store. She said the shooter followed them through the store and then police arrived.
“I said ‘Oh, no,’ these are gunshots,” the cashier, who wasn’t identified, told WMC. “I got out of there and whoever was in front of me, I grabbed them and just took off.”
Lane described the injuries to the survivors as “very serious.
“It’s horrific,” Lane said. “I’ve been involved in this for 34 years and I’ve never seen anything like it.
Collierville High School is less than three miles from the Kroger store. Students there sheltered in place until police secured the scene of the shooting, WMC reported.
In a statement to multiple news outlets, Kroger said “we are deeply saddened by the incident.
“The entire Kroger family offers our thoughts, prayers and support to the individuals and families of the victims during this difficult time. We are cooperating with local law enforcement, who have secured the store and parking lot,” the statement said. “The store will remain closed while the police investigation continues, and we have initiated counseling services for our associates.

child get killed after get raped to steal her liver for use in magic...

Driver shot in the head crashes into home in north Houston