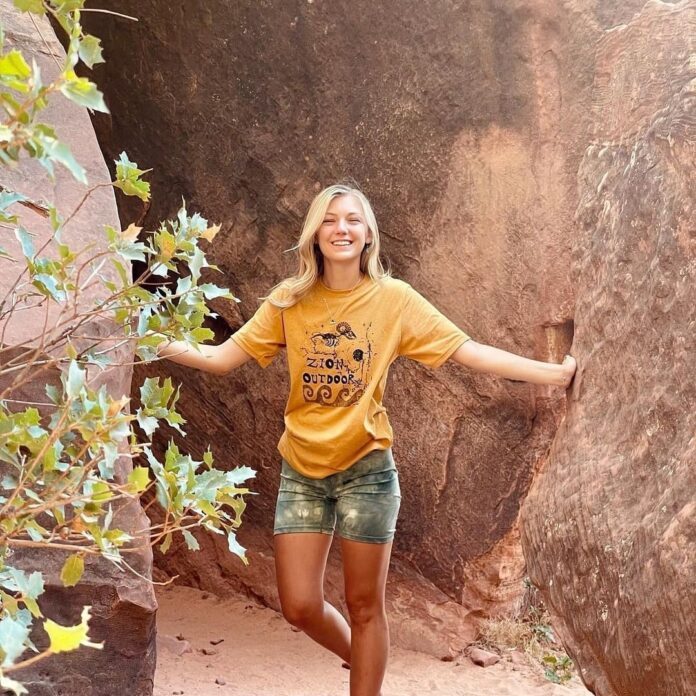 Investigators have gained court permission to access the contents of an external hard drive they say was found in the van of a 22-year-old Long Island woman who disappeared while on a cross-country trek and is believed dead — as the search continues for the still-missing boyfriend said to be a person of interest in the case.

The search warrant confirmation from Florida’s 12th Judicial Circuit court in Sarasota County says the external hard drive was discovered during the Sept. 14 execution of another search warrant linked to the case of Gabby Petito.

That Sept. 14 search warrant applied to the van she and Brian Laundrie traveled across parts of the western United States in — and it was the same white van that Laundrie returned to his home in Florida driving alone, 10 days before Petito’s parents reported her missing. Investigators said in their warrant request they believe the hard drive to contain evidence connected to her disappearance.

They also included newly public details — that the last text message Petito’s mother received from her phone was “odd.” It read, “Can you help Stan, I just keep getting his voicemails and missed calls.” The reference to Stan was regarding Petito’s grandfather, but Petito’s mother said she never calls him “Stan,” which made her concerned there was something wrong with her daughter. The phone was turned off that same day, more than two weeks (15 days) ago, the filing said.

The initial filing also said investigators believed there was a probable cause that the hard drive contained “evidence relevant to proving that a felony has been committed,” according to the document.

The white van was located at the Laundrie family address where Petito had been living with her boyfriend’s family prior to their trip on Sept. 11, the same day Petito’s mother reported her missing. Laundrie’s family refused investigators permission to speak with their son, later described as a person of interest, at that time.

According to the court filing approving the warrant, the court clerk said there was probable cause Petito was “unable to care for herself due to her increased anxiety,” which created exigent circumstances that would warrant the search. That finding was based on a “totality of the circumstances” that includes a 911 call response to Utah where Petito was seen on body camera footage describing herself as suffering from high anxiety and having difficulty managing the intensity emotions.

Petito’s cellphone had been turned off for about 15 days, with no confirmed sightings of her since Aug. 27, at the point the court authorized the warrant. It did so to assist in the finding of a “missing endangered subject,” the clerk wrote.

Police executed the van search warrant on Sept. 16 and said a digital forensics lab report accounting for the full inventory of what was found in the van would follow. Further details of what may have been found in the van weren’t immediately known.

Meanwhile, federal, state and local investigators are still trying to ascertain the whereabouts of Laundrie, who hasn’t been seen since family members said they said him Tuesday. North Port, Florida, police scoured a vast nature preserve over the weekend and said Monday they felt they had exhausted that area.

It’s not clear where investigators planned to search for him next. A large contingent of agents with equipment descended on Laundrie’s North Port home Monday morning hours later.

Law enforcement agencies continue to search for Laundrie, police said. Authorities have continued to stress that he is not a suspect, merely a person of interest, and that they are pursuing a missing person investigation in his case.

The developments early Monday follow the FBI’s news a day earlier that a body believed to be Petito was found by law enforcement agents who spent the weekend searching campsites on the eastern border of Grand Teton National Park.

The cause of death has not yet been determined, said FBI Supervisory Special Agent Charles Jones. Specifics on where and how the body was found were not disclosed. An autopsy won’t be conducted until Tuesday, officials said.

“Full forensic identification has not been completed to confirm 100% that we found Gabby, but her family has been notified,” Jones said. “This is an incredibly difficult time for (Petito’s) family and friends.”

Jones and other law enforcement officials declined to take questions during a Sunday evening press conference in Grand Teton announcing the body’s discovery.

Petito’s father, Joseph, posted on social media an image of a broken heart above a picture of his daughter with a message that said, “she touched the world.”

An attorney who has been acting as a spokesman for Petito’s family asked in a statement that the family be given room to grieve.

Attorney Richard Benson Stafford indicated that the family would make a public statement at a later date, and he thanked officials with the FBI, Grand Teton Search and Rescue and other agencies that participated in the search for Petito.

“The family and I will be forever grateful,” Stafford said in a statement.

An attorney for the Laundrie family, meanwhile, has planned a press conference on Long Island for afternoon.

Dem senator: Talks with GOP on police overhaul have failed

Sept. 11 then and now: See how Lower Manhattan has changed in 20 years