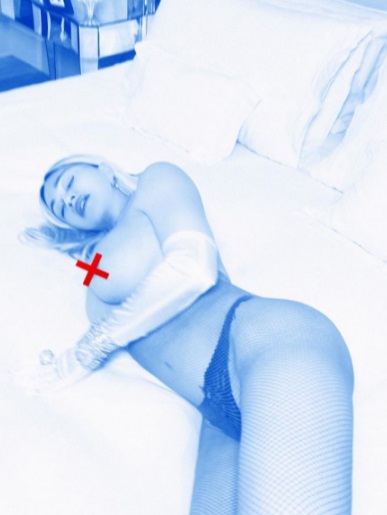 Madonna put on a daring display as she went topless on Instagram on Thursday in a slew of snaps from an outfit fitting.

The singer, 63, left little to the imagination as she posed seductively on her bed in nothing but a thong, fishnet tights and long silk evening gloves

Another snap showed the star gazing down the camera lens wearing a jaw-dropping diamond necklace.

Next up, the Michigan native showed off her ample cleavage as she clutched her chest in a plunging dress in a racy black-and-white photo.

‘Fittings are a form of torture……..’ she wrote in the caption along with a shoutout to @tonycassanelli for the paintings that are visible in a few of the photos.

Madonna also shared a close up shot on her thong lingerie and fishnet tights as she tried on a number of sexy outfits.

The legendary pop star also took to her Insta-Stories and post five more artistic and provocative images of herself that she captioned: ‘Check the fit.’

The photos included a stylish headshot; her hand reaching out to grab a brass cross; a look at her lower body in black lingerie and fishnet stockings; another pose in lingerie on that very same bed; and one that displayed just her legs in stockings.

The Vogue star concluded her Insta-Story post with a shot of one bejewelled heel, a male model posing topless in front of the bed in purple pants, and presumably the same young man’s legs while wearing heels and grey sweatpants adorned with black stars.

Earlier this month, Madonna told her Instagram followers she was going to ‘look any way that I want to look’ as she took aim at trolls whom she feels are ‘constantly criticizing’ her.

The Queen of Pop sported a fishnet top and cat eyeglasses for the video.

I just want to say to all my fans out there, and people who are trolling and stuff and constantly criticizing me because, “Oh my God, I’m using a filter!” and “Oh my God, I don’t look this way?!”‘ the Vogue icon began.

‘Well, f**k off b**ches, because I’m gonna look any way that I wanna look, alright? It’s a free world. And you’re not in charge,’ Madonna continued.

‘In fact, I’m not even in charge!’ she added cheekily. ‘But I’m still going to do whatever I want, so deal with it, OK?

‘And finally, I just want to say that I am rising above. I’m rising above all the stuff and I’m connecting to my perfected soul,’ her Madgesty concluded.

Missouri man gets 15-year term for trying to drown infant

Two dead after colliding with a pool in Indianapolis

1 killed, 2 injured in shooting at street party in Newark