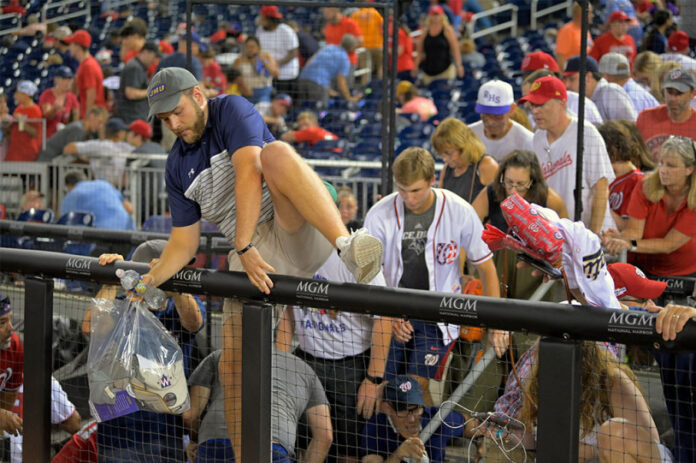 Chaos erupted during baseball game at Nationals Park — with fans fleeing or taking cover under seats — after a shooting outside the Washington, DC, stadium.

Police said a shootout between people in two cars at around 9:30 p.m. had left three injured, including a female bystander who was attending the game and was hit while standing outside the ballpark.

The other two victims were in one of the cars and later walked into a local hospital with gunshot wounds, cops said.

There was “no ongoing threat,” cops wrote in a tweet at around 10 p.m., adding that the game between the Washington Nationals and San Diego Padres was suspended.

Several loud bangs were heard outside the third base gate around 9:30 p.m., just as the players were leaving the field in the middle of the sixth inning.

“Then there was kind of a collective panic from that area in particular right outside the gate,” Nationals fan Stephen Lyons, 20, told The Post by phone after the mayhem.

“Everyone was like ‘oh this is something that was not fireworks.’”

The college student, who was sitting in section 111, near the third base line, said panic ensued because fans didn’t know what to do and were not given “sufficient directions.”

Officials did not address the gunshots over the loudspeakers for at least five minutes, leading to “pandemonium,” another attendee, Jaime Varela, 31, told The Post.

Varela said he saw people both ducking for cover and scrambling to the exits from his perch in the right field terrace, adding, “For a good five minutes nobody knew what was going on.”

“It was just a chaotic scene,” umpire crew chief Mark Carlson told the Associated Press. “We heard what sounded like rapid gunfire. We didn’t know where it was coming from.”

Fans could be seen taking cover under their seats as helicopters circled the ballpark, footage tweeted by a WBRZ-TV reporter showed.

Police sirens blared as panic broke out, with several in the crowd trying to book it out of the ballpark.

Varela shared footage of throngs of fans trying to exit the stadium — only to quickly reverse course to another exit as armed police stood guard.

Other videos showed fans streaming onto the field or into the dugouts in fear and confusion.

Radley Ellenbogen said he was sitting behind home plate when he heard the gunshots.

“There was just gunshots and a bunch of people running,” he told The Post over the phone, adding that he had raced to the concession stands during the madness.

Footage taken from a nearby rooftop showed the frantic mass evacuation of the stadium, which is in the city’s Capitol Riverfront neighborhood.

Players could be seen running into the stands, including Padres shortstop Fernando Tatis Jr., who grabbed family members and brought them into the clubhouse, in video posted by Kevin Acee, the Padres reporter for the San Diego Union-Tribune.

Nationals pitcher Patrick Corbin was one of several people who fled for the concourse. Others rushed into bathrooms or suites, according to an NBC Washington photojournalist.

The Nationals initially announced there had been an incident outside the stadium and posted a message on the scoreboard asking fans to remain inside.

“Please remain calm and remain inside the stadium,” said the message over the loudspeaker.

About 10 minutes later, the home team tweeted that a shooting was was reported outside the third base gate and that “fans are encouraged to exit the ballpark via the CF and RF gates at this time.”

The game was halted in the sixth inning with San Diego leading the Nats 8-4. It will be resumed Sunday afternoon, followed by the regularly scheduled game.

Police were questioning the two gunshot victims who were in one of the cars, and were still trying to find the second vehicle involved in the shooting.

1 dead, several injured, in I-93 crash in Canton