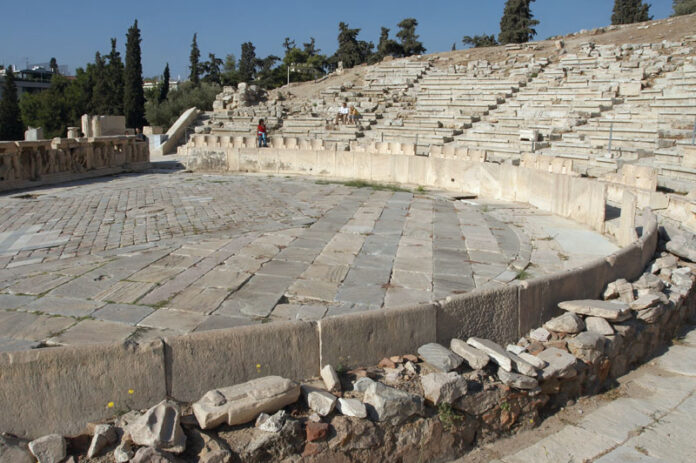 THE THEATRE OF Dionysus – ACROPOLIS OF ATHENS

The Theatre of Dionysus is on the south slope of the Acropolis, and is said to be the birthplace modern theatre. Although now the theatre of Dionysus doesn’t look that impressive, especially next to the much better preserved Odeon or Theatre of Herodes Atticus, in its day it would have been an incredible sight.

THE HISTORY OF THE THEATRE OF DIOYSUS

The Theatre is built in to a hollow on the Acropolis rock and wasn’t discovered until well into the 18th century. Remains have been found at the site that date back to the 6th century and are all to do with the worship of the God Dionysus, the first signs of a theatre are not until the 5th century BC, probably made out of wood and stones being added later.

THE BIRTH PLACE OF THE MODERN THEATRE

It was during this period that some of ancient Greece’s greatest plays were written by some of the most famous playwrights in history such as Euripides, Aeschylus, Aristophanes, Meander and Sophocles. The playwright competions were held here to celebrate the festival Dionysus.

It wasn’t until 390-324 BC when the Athenian statesman Lycurgus did major building programs in the city, and the Theatre of Dionysus was completely rebuilt with stone and a 3 tiered seating area that could hold up to 17,000 people. During the later Hellenistic period 67 marble thrones were built around the centre of the theatre with the names of important dignitaries carved into them, although there are still thrones around the theatre these are most likely Roman copies.

GLADIATORIAL GAMES AND THE ROMAN PERIOD

The ruins of the Theatre of Dionysus that you see today are mostly of the Roman period including the amazing mosaic portrayal of Dionysus on the floor of the theatre. Much of the theatre was modernized under the Romans including the capacity especially by the Emperor Hadrian who even had a special seat only reserved for him. Although the ancient Greeks used the theatre for Tragedies and plays the Romans adopted the Theatre of Dionysus to hold Gladiatorial games as well, there was even a metal guard rail to protect the crowd from the blood sport!

New York celebrates progress in the Battle of Corona and record casualties in 12...

US warns about swimming at beaches in El Salvador