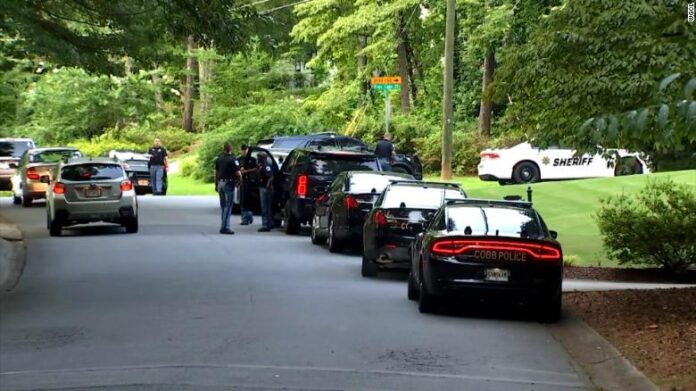 A golf pro was killed at an Atlanta-area golf course and two other men were found dead as authorities continued to search for his killer.

A man reportedly drove a pick-up truck into a sand trap on the course. When Siller went to go see what was going on, he was shot and killed. Footage from WAGA-TV showed a white pickup truck stuck on a hill in the middle of the club’s golf course.

Two other men were found dead in the bed of the pick-up truck.

Siller, who was in his 40s, was a member of the Pinetree Country Club staff and had previously worked as the director of golf and head golf pro at Summit Chase Country Club, according to the Gwinnett Daily Post. Kennesaw is about 30 miles northwest of Atlanta.

Siller, a husband and father of two, was reportedly responding to an issue on the course’s 10th hole when a man in a white truck pulled his vehicle onto a sand trap nearby, according to the Post. When Siller went to talk with the man in the vehicle, he was shot and later died.

Officials described the suspect as a 6-foot-1-inch Hispanic male with long hair, dark-colored work pants and a white or tan shirt.

Neighbor John Lavender told WAGA-TV that he heard “five, six booms go off” and wasn’t sure whether it was gunshots or fireworks. “You just don’t think it’s gunshots in this area,” he said.

The country club is near the campus of Kennesaw State University. After the shooting, the school tweeted that there were no credible threats to campus, which is about 25 miles northwest of downtown Atlanta.

Victim walked to NC convenience store for help after being shot in the leg...

Couple found dead with their child had suicide pact