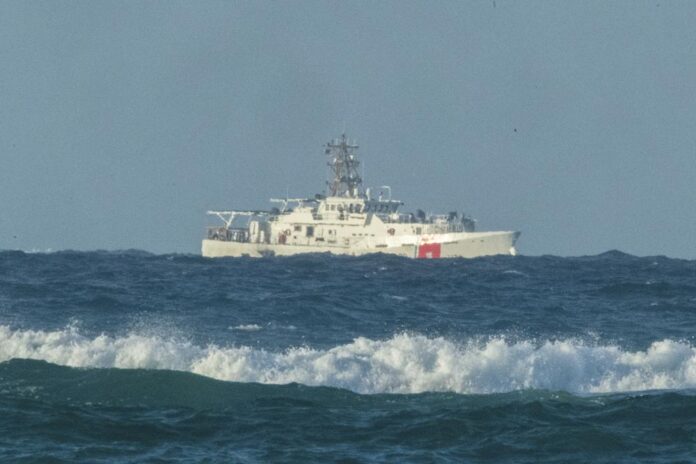 HONOLULU (AP) — Two pilots told air traffic controllers that their engine had cut out and they needed help moments before crashing their cargo plane into the Pacific Ocean off Hawaii .
“It doesn’t look good out here,” one of the pilots said before the Boeing 737 broke apart as it entered the water.
Both pilots, the only people aboard, were seriously injured but survived the crash. An hour later, rescuers found the two clinging to packages and parts of the plane in about 150 feet (46 meters) of water several miles off Oahu, authorities said.
“One was on the tail and the other clinging to packages,” Coast Guard Lt. Commander Karin Evelyn wrote in an email to The Associated Press. As an agency helicopter got close, “the airplane began to sink putting the individual on the tail in the water.
The crews hoisted them safely on the aircraft.
The rescue swimmer then assisted the other individual.”
The pilots of Transair Flight 810 heading from Honolulu to Maui reported engine trouble and were trying to return to Honolulu, the Federal Aviation Administration said in a statement.
“We’ve lost No. 1 engine, and we’re coming straight to the airport,” one of the pilots said in air traffic control communications. “We’re going to need the fire department. There’s a chance we’re going to lose the other engine, too, it’s running very hot. We’re very low on speed.

The pilot said they weren’t carrying hazardous materials and had two hours’ worth of fuel.
They asked the tower to advise tPilot minutes before ocean crash: ‘It doesn’t look goodhe Coast Guard, then asked if there was a closer airport than Honolulu.
After a stretch of silence, the controller asks if the pilot is still there. There was no response.
“Looks like they went down in the water,” the tower says.
Later, a rescuer aboard a Coast Guard helicopter sent to search for the pilots tells air traffic control: “We do have an aircraft in the water … we’re currently overhead (the) debris field.”
Minutes later: “We have zero, two souls in sight in the water.”
The tower responded, “OK, so you have both guys, both souls in sight?”
“Both souls in sight, yes, sir,” the rescuers responded.
The pilots, whose identities were not immediately released, were taken to a hospital. Officials at Queen’s Medical Center said a 58-year-old was in critical condition, Hawaii News Now reported. The other pilot, a 50-year-old, was in serious condition with a head injury and multiple lacerations,
The Coast Guard reported flying over the crash site off Oahu to evaluate for pollution after the sun came up in the morning. Debris and fuel remained in the water.
The FAA and the National Transportation Safety Board will investigate.
The NTSB said in a tweet that it will send a team of 10 investigators.
The plane is a 46-year-old Boeing 737-200, a much earlier version of the 737 than the Max, and one that U.S. airlines no longer use for passenger flights. There are fewer than 60 737-200s still flying worldwide, according to aviation-data researcher Cirium.
The Boeing 737 first flew in the late 1960s and is the most popular airline plane still in production. Boeing has delivered more than 10,500 of them and has unfilled orders for about 4,000 more, almost all of those for the latest version of the plane, the 737 Max.
Over the years, about 200 737s have been destroyed in crashes and several hundred others have been involved in less serious accidents and incidents, according to the Aviation Safety Network database.
“For a jet that has been in production for so long and is being used so extensively, 203 hull-loss accidents can be considered a very good safety record,” said Harro Ranter, who runs the database.
He said the plane’s accident rate improved dramatically from the first models to more recent ones that preceded the Max.
Boeing said in a statement: “We are aware of the reports out of Honolulu, Hawaii and are closely monitoring the situation. We are in contact with the U.S. National Transportation Safety Board and are working to gather more information.”
There have been some water landings over the years in which people survived, the most famous being the 2009 crash of a US Airways flight in New York’s Hudson River where all 155 people on board survived.
All four people on board survived a cargo plane crash into water short of a runway in Gabon in 2011.
In other cases, some passengers and crew survived but some died, including a hijacked Ethiopian Airlines plane that ran out of fuel and crashed into the Indian Ocean in 1996, a Tunisian airliner that went down off the coast of Sicily in 2005, and an Indonesian airliner that landed in a river during a thunderstorm in 2002.

Nine people, including one teenager, shot in Newark