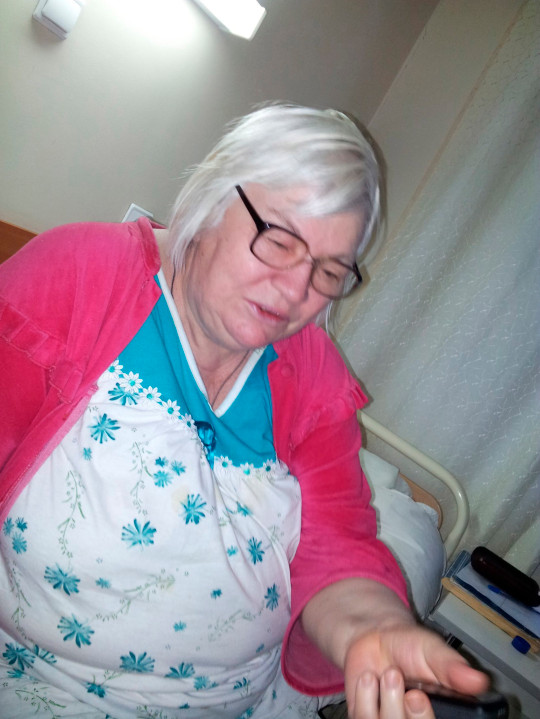 A 63 year old grandmother killed her ‘tyrant’ son by hitting him over the head with a large frying pan, before using a power saw to cut his body into more than 70 pieces.

The woman – an accountant named only Lyudmila R – was found guilty of murder but spared jail because she was provoked by him repeatedly beating and abusing her, and making her life ‘hell’.

On one occasion the 42 year old man – whose name was not released – attempted to rape her ‘after drunkenly mistaking me for his ex-wife’, she told detectives.She had begged police to protect her but officers did no more than speak to him, she said.

The woman had been detained in Khabarovsk as she carried ‘suspicious’ black bin liners from her flat to a waiting taxi.

Neighbours had called police because they detected the ‘smell of a dead body’ from her apartment.

She told officers the bags contained ‘rotten bear meat’ brought by her son from a hunting trip.

But a police examination showed human hands and feet in a bag and she was detained.

A video discreetly shot by a neighbour shows the black bags being checked.

‘For about three hours the woman kept telling us the story about bear meat,’ said a police source.

‘But then she realised that it was nonsense and told the truth.’

Lyudmila told how her life had been ‘turned upside down’ when her son was thrown out by his wife and came to live with her.

After a year when the father-of-two was sometimes ‘wild’ and was like a ‘tyrant’, she snapped on a day in August when he attacked and abused her after messing up the bathroom in her flat.

‘I took a frying pan from the kitchen and hit him over the head,’ she said.

He collapsed and remained unmoving on the floor for a day.

She repeatedly stabbed his dead body.‘I knew that I had to get rid of his corpse somehow and I was afraid of calling police’, she told police.

In extraordinary testimony to a local news source she explained how she used an angle grinder power tool to disembowel and dismember her son into 70-plus parts.

‘It was as if my mind switched off,’ she recalled. ‘I was doing everything like a robot.

‘I went to buy a power saw, because my hands were aching and I could not use a knife.

‘I covered the floor with plastic, then I cut off his legs, arms and head.

‘I disembowelled him, sliced off his penis and took out inner organs.‘I had to remove muscles tissue from bones, carefully putting the cut off pieces into plastic bucket, container and a basin.

‘Then I packed each into plastic bags and tied them up. I put his head, feet, hands and main body part – spine with ribs – separately.’

She explained: ‘I did not shed a single tear while doing all this. I was in a peculiar state of mind, as if moving in a fog.’

She hurt her hand while dismembering her son with the power tool and went to hospital.

Lyudmila was admitted for a week – during which the human remains in her flat began to rot.

Neighbours phoned her and told her about the obnoxious smell – so she discharged herself and went home, intending to get rid of the body parts.

‘My neighbours called the police, and they looked into one bag,’ she said.

‘They saw severed feet and hands. That was it.’The woman was this week convicted of killing her son while in a state of extreme emotional disturbance.

She was spared jail but for 23 months has been banned from leaving her city.

She is subject to a night curfew and cannot change her address without permission.

State prosecutor’s official said: ‘To be honest, we have not had such a case in the past 15 years.’

Smollett is charged with 6 counts of disorderly conduct and faces up to 3...

Alzolay expected to start for the Cubs against the White Sox