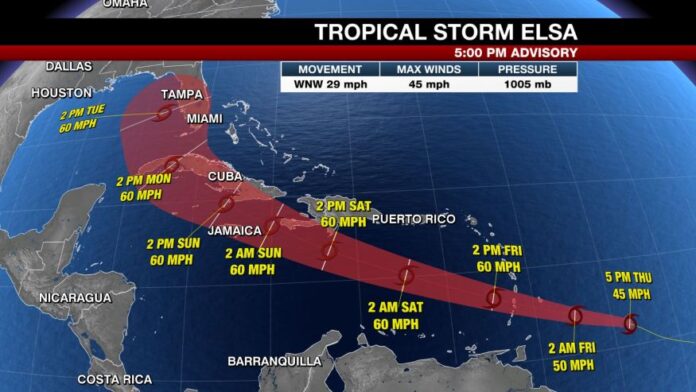 Tropical Storm Elsa is quickly making its way toward the Windward Islands in the Caribbean Sea, and the National Hurricane Center is monitoring what potential impacts it could eventually have on the United States, including Florida.

Elsa formed early Thursday morning, strengthening from Tropical Depression Five. As of 5 p.m. ET, maximum sustained winds were at 45 mph. Some additional strengthening is expected in the next two days, forecasters say.

The latest forecast track for Elsa shows Florida in the storm’s cone of uncertainty. While the NHC says there is a risk of storm surge, wind and rainfall impacts in the Florida Keys and parts of the southern Florida peninsula early next week, there is high uncertainty in Elsa’s position and strength in the long-range forecast, meaning potential impacts to Florida could change.

Before Elsa even gets near the U.S., it has to make it past the islands in the Caribbean. As of 5 p.m., it was about 410 miles east-southeast of Barbados.

The NHC says Elsa will likely pass near or over parts of the Windward Islands or the southern Leeward Islands on Friday before moving into the eastern Caribbean Sea later Friday night. The forecast track then takes Elsa near the southern coast of Hispaniola on Saturday and near parts of eastern Cuba by Sunday.

The NHC is warning that tropical storm conditions are expected to start early Friday in parts of the Windward and southern Leeward Islands. A tropical storm warning is in effect for Barbados, Martinique, St. Lucia, St. Vincent and the Grenadines.

A tropical storm watch has been issued for Grenada and its dependencies and parts of Haiti.Elsa is expected to bring heavy rain across the Windward and southern Leeward Islands with rainfall totals near 3 to 6 inches. The NHC says there could also be isolated flash flooding and mudslides.

Elsa is the fifth named storm of the 2021 Atlantic hurricane season, after Ana, Bill, Claudette and Danny.

According to Dr. Philip Klotzbach with Colorado State University, Elsa is the earliest fifth named storm on record. The previous record was set last year by Edouard, which formed July 6.

2 dead in a head-on crash in Buckeye Valley

Temps stay comfortable in the mid-80s, partly cloudy for the weekend