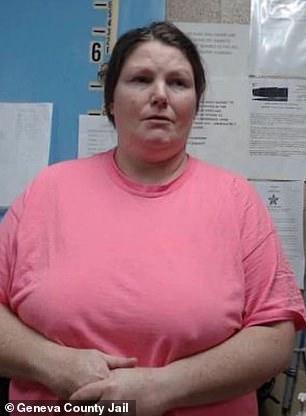 An Alabama grandmother and her teenage former son-in-law have been arrested for livestreaming the sexual assault of the man’s one-year-old daughter.
Lisa Williamson, 41, is accused of livestreaming Steven Anthony Jackson, 19, sexually assaulting his daughter on a pornographic site, police said.
The video was reported to the FBI by someone out of the state, Geneva County Sheriff Tony Helms said.
The Alabama State Bureau of Investigation raided their residence over the weekend and both have been arrested and charged.
Williamson faces charges of disseminating obscene pornography, possession of child porn, and possession of pornography,
Jackson faces charges of first-degree sodomy and production of child pornography.
‘The evil of this magnitude exists in the world, especially for those of us who have children and grandchildren and [know] how precious they are. We do everything we can to protect them, and in this case, where the persons who were supposed to be protecting them are the ones that are causing the problem,’ Helms said.
‘This is some of the worst behavior you’ll find,’ Helms added.

Official: Sturgis Motorcycle Rally is the busiest in years

3 teenagers die in a crash while fleeing police in Minneapolis

A year ago: Death and birth at hospital hit by Beirut blast