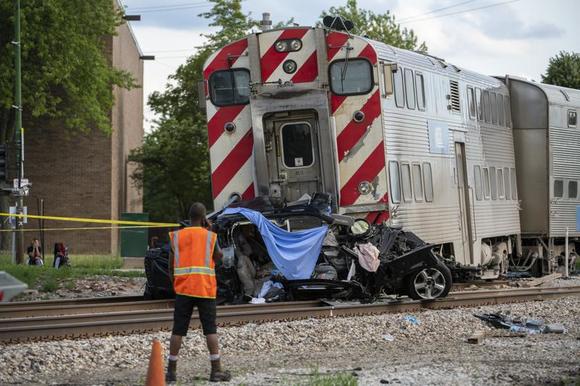 CHICAGO (AP) — Witnesses told investigators that a car in which three people were killed when it was struck by a Metra train in Chicago had pulled out of a row of stopped vehicles and was crossing the tracks when it was struck, a spokesman for the commuter rail system said.
Metra also has “verified that the gates were working as intended” at the time of Sunday’s crash, spokesman Mike Gillis said.
The crash happened just after 5 p.m. on the city’s Far South Side. Gillis said the train was heading north into the city at about 75 mph (121 kph) — about 4 mph (6.4 kph) slower than the speed limit for trains in the area — when the car carrying three adults and a child was hit.
Metra officials have said that the train pushed the car about a half-mile (about 800 meters) before it came to a complete stop. The force of the impact caused the car to catch fire and the train’s front car to partially derail.
Two adults and the child were pronounced dead at the scene and a 43-year-old man, who also was in the vehicle, was transported to an area hospital in good to fair condition.
The train’s conductor and engineer also reported injuries, though they were believed to be non-life threatening, Metra spokeswoman Meg Reile said. She said 41 passengers aboard the train declined medical attention and were transported to a different station so they could continue their way into the city.
The names of the three people who died have not been released by the Cook County Medical Examiner’s office.

Second man charged in Lake of the Ozarks shooting death