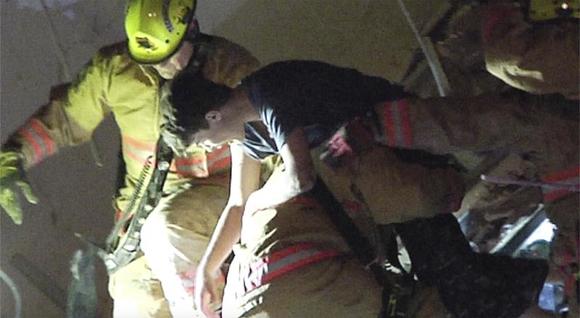 SURFSIDE, Fla. (AP) — It was just a small hand waving through the wreckage, yet one of the few hopeful moments amid a largely fruitless effort to find survivors.

Nicholas Balboa was walking his dog on the beach when he heard the rumbling he thought was thunder, he told The Associated Press in a telephone interview . Sensing something was wrong, he dropped off his dog and hurried back outside.

Residents were flooding the streets and pointing at a gaping hole and dust cloud where a seaside condominium tower had collapsed. Fire and rescue crews had not yet arrived, and it was eerily quiet on the back side of the building. As he began to take photos of the wreckage, he heard what sounded like a child’s voice.

Balboa, 31, climbed through a pile of glass and rebar in his flip-flops, desperate to get closer.

“Keep yelling so I can follow your voice,” Balboa said. He soon saw a hand waving from the rubble.

The boy, Jonah Handler, said he and his mother, Stacie Fang, were the only ones in the condo that had imploded when part of the building went down. He kept asking about his mom. Balboa and a stranger tried desperately to clear away the rubble surrounding Jonah but it was too heavy. It looked like a wall or support beam, Balboa said.

“I’ll be right back. I’m going to get help,” Balboa said, trying to comfort the boy.

“He was absolutely terrified. The sheer terror in his voice, that fact that his mother, that he can’t find her,” said Balboa, who was in town from Arizona visiting his father.

Video of Jonah’s rescue has played on repeat in the news, tugging hearts as rescuers with flashlights slowly helped him out from under a pile of cement and twisted steel and carried him away on a stretcher.

Asked about his condition, Lisa Mozloom, a friend of the family told the AP, “He will be fine. He’s a miracle.” Mozloom said Jonah had been taken to the hospital at one point but said he was “stable.”

Authorities have said at least four people died in the building collapse, and with 159 still unaccounted for they fear the death toll will rise sharply. They have not publicly released the identities of the deceased, but Mozloom confirmed Fang’s death.

“There are no words to describe the tragic loss of our beloved Stacie,” members of her family said in a statement that Mozloom released on their behalf. They said they were deeply grateful to those who had reached out and that “the many heartfelt words of encouragement and love have served as a much needed source of strength during this devastating time.”

The family requested privacy “on behalf of Stacie’s son, Jonah,” saying it needed time to “to grieve and to try to help each other heal.”

Balboa said he was heartbroken to learn of Fang’s death.

Nine people, including one teenager, shot in Newark