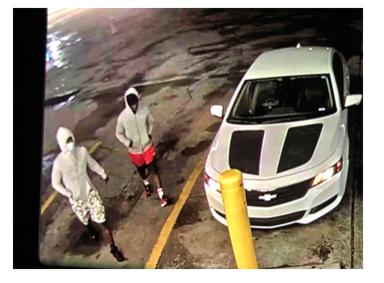 Police need the public’s help identifying suspects caught on surveillance photos after a teenager was killed and two other people were shot outside a convenience store in northwest Houston overnight.
Houston police responded to a shooting call in the 8000 block of Grow Lane around 9:15 p.m.
Upon arrival, officers discovered a black Cadillac with three shooting victims inside.
Jasmine Burrell, 19, was fatally shot, and two other men, 30-year-old Donovan Crawford and 31-year-old Chaz Caddie, were taken to the hospital with gunshot wounds, according to HPD.
An investigation revealed that the shooting was related to a call officers received around the same time from a convenience store about a block away.
Officers received a call about gunshots being heard at the M&G Market convenience store in the 8100 block of West Tidwell.
Houston recording 222 homicides this year alone marks a 42% increase in 2021, with a 91% increase compared to two years ago. Here’s a look at the overnight shootings that contribute to the growing crime issue.
Police say surveillance video footage shows two male suspects walk up and unload rounds into the black Cadillac. The Cadillac then pulled away and stopped on Grow Lane, where officers found the victims.
In total, police are looking for four suspects, the two men who were seen on surveillance video shooting into the Cadillac, a suspect officers say identified the victim’s vehicle and the suspect who drove the get-away vehicle.
Police described the suspects only as four Black men. Surveillance photos show the two shooters wearing white hoodies and shorts.
The suspects were last seen in a 2019 white Chevrolet Impala SS with two custom black stripes on the hood and no front license plates. The vehicle can also be seen in surveillance photos.