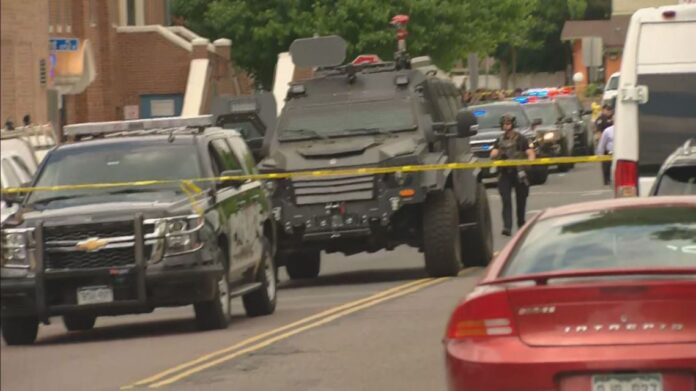 Police are investigating a shooting in Olde Town Arvada that left three people dead, including a veteran police officer. Another person was also killed after being shot by the gunman.
The suspect was also shot and killed.
Officers rushed to the area at 57th and Olde Wadsworth about 1:30 p.m. after receiving 911 calls about an officer being hit by gunfire near the Arvada Library.
The veteran officer with the Arvada Police Department was shot and killed.
Arvada police say that another person was shot and killed by the suspect.
That person’s identity has not been released.
Police also searched a vehicle in the area for possible explosives. The suspect was shot and killed.
Police are not searching for any additional suspects and there is no longer any threat to the public.
Police urged the public to stay away from the area during the investigation. Much of Olde Town Arvada remained closed at night due to the intense investigation even though the shelter in place has been lifted.
Police said they are not looking for any additional suspects.
Crowds lined the streets of Arvada with American flags and Thin Blue Line flags during the procession honoring the fallen Arvada police officer on evening.
Gov. Jared Polis released the following statement, “We are closely monitoring the troubling situation in Arvada. My thoughts are with the family and friends of the officer who was tragically killed in the line of duty while swiftly and bravely responding to protect civilians in the area.”
Arvada Mayor Marc Williams expressed his sorrow in this statement, “It’s a horribly sad day or the city of Arvada. We have been a community that has been very safe for many many years. We have only lost two officers on duty in the history of the city and neither were firearm involved. We are shocked and saddened and it reminds us everyday how important our police officers are and that we owe them so much.”
Rep. Ed Perlmutter, representing Colorado’s 7th Congressional District, tweeted this statement, “I’m devastated to learn of the loss of one of Arvada’s police officers. Thank you to the first responders at the scene who are working to keep our community safe.”
The Arvada Chamber of Commerce said that they hid in the basement of their office for about an hour after shots broke out. Their offices are located close to where the shooting happened.
The chamber released this statement, “The Arvada Chamber of Commerce is located less than a block from where the active shooter was. Arvada Chamber President, Kami Welch, and her team at the chamber and the visitors’ center went into the basement of the chamber during the shooting. They were in the basement for over an hour.”
Kami continued with, “Thank you to everyone who has reached out this afternoon. The Arvada Chamber team is safe and awaiting additional information. Our hearts are with the Arvada Police Department and all who were impacted today.
Arvada City Hall will remain closed for the rest of the day on Monday and the Arvada City Council meeting scheduled for Monday night has been canceled. The city released this statement, “In light of this afternoon’s public safety incident in Olde Town Arvada, City Hall will be closed for the remainder of today, June 21, to ensure City rooms and other resources are available to assist our Police Department and other public safety partners in responding to the event. In addition, tonight’s City Council meeting is cancelled.
After a short closure during the investigation, the G Line train station in Olde Town Arvada reopened.
There are several police agencies on scene, including Arvada police, Jefferson County Sheriff’s deputies, Edgewater police and Arvada firefighters.

80-year-old man arrested on suspicion of raping a 7-year-old girl he was trusted to...

Firefighters save bride’s wedding from going up in flames