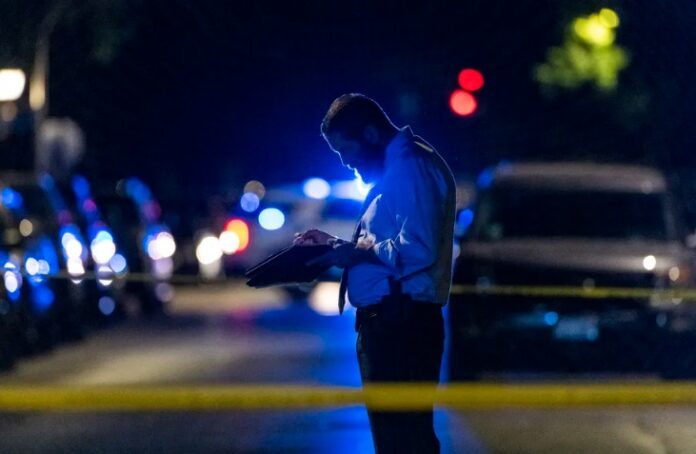 A 16-year-old boy was found fatally shot in the bedroom of his home in Roseland on the South Side. The boy had suffered a gunshot wound to the head in the first block of West 109th Place, Chicago police said.

The teen was pronounced dead at the scene.

Two people were shot, one fatally, in Woodlawn on the South Side. They were standing outside about 8:40 a.m. in the 6200 block of South Evans Avenue when a small gray car drove by and someone inside fired shots, Chicago police said. A male was taken to the University of Chicago Medical Center, where he was pronounced dead. An 18-year-old man was struck in the abdomen and taken to the same hospital, police said. His condition was not immediately known.

A man was found fatally shot inside a home in Park Manor on the South Side. The 27-year-old was in the bedroom of the home in the 7500 block of South Indiana Avenue with another person when he was shot in the head about 3:25 a.m., police said.

He was pronounced dead at the scene, police said. The person with him was taken in for questioning, police said.

An hour earlier, a 58-year-old man was fatally shot inside a home in Gresham on the South Side. The man was shot in the back in the 700 block of West 76th Street about 2:45 p.m., Chicago police said. He was taken to the University of Chicago Medical Center, where he later died. The Cook County medical examiner’s office has not yet identified him.

A 13-year-old boy was shot while riding a bike in West Pullman on the Far South Side. He was hit in the leg about 3:30 p.m. in the 12200 block of South Stewart Avenue, police said. The teen was taken to Comer Children’s Hospital in serious condition and was stabilized. No one was in custody, and police did not release a description of the shooter or other details of the attack.

A man riding a bicycle was seriously wounded when he was caught in crossfire in South Shore.

The 39-year-old man was riding in the 7100 block of South Bennett Avenue about 2:55 a.m. when two people wearing all black and standing on the corner fired at other people, police said. He was struck in the head and body, and taken in critical condition to the University of Chicago Medical Center.

A teenage boy was shot dead in Chicago

Missouri gas prices rose 50% in past year, highest cost per gallon since summer...

A Casa Grande police suspect is shot dead after a chase