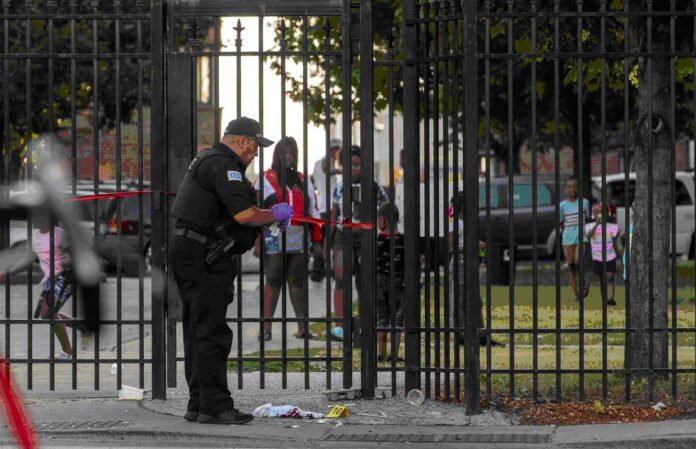 A 31-year-old man was killed in a drive-by shooting in Parkway Gardens on the South Side.

About 5:20 p.m, the man was on the sidewalk near 64th Street and King Drive when a light-colored vehicle pulled up and someone inside began firing shots at him, Chicago police said.

He suffered a gunshot wound to the head and was transported to the University of Chicago Medical Center where he was pronounced dead, police said.

A white t-shirt sat in a pool of blood near an entrance to the homes, as onlookers, including children, gathered around to watch police work the scene.

Chicago police work the scene where a person was shot and killed in the 6400 block of South King Drive, in the Parkway Gardens neighborhood

“It’s just crazy out here,” one woman said as she stood nearby.

At least a dozen shell casings littered the street near the intersection of 64th Street and King Drive. Traffic was shut down in both directions on King Drive between 63st and Marquette, with CTA buses temporarily rerouted.