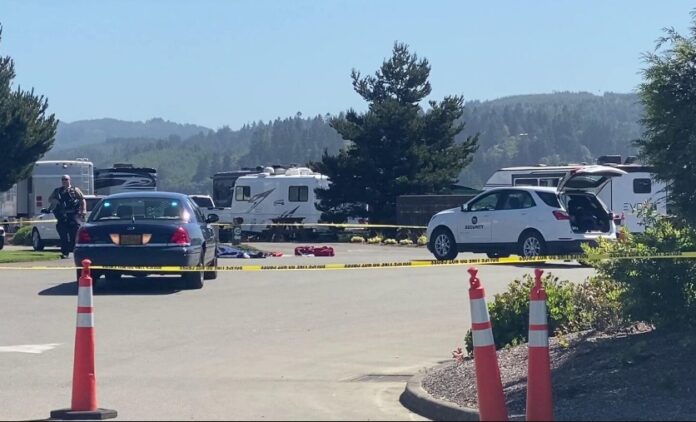 The suspect connected to at least 3 deaths in North Bend was last seen disappearing into the woods between Eugene and Florence armed with a handgun.

Investigators do not yet know who the suspect is.

The pickup connected to the deaths was found along Highway 126W crashed and set on fire.

The registered owner of the pickup was found dead in trailer at the RV park.

The district attorney in Coos County said a witness saw the driver of the truck get out with a handgun and disappear into the wood.

Frasier said the investigation started with 911 calls from the RV park at the Mill Casino.

A driver in a pickup had hit a couple, killing one and injuring ther other. Frasier said a woman was taken to Bay Area Hospital in critical condition.

Then police got a call reporting a shooting at Herbal Choices cannabis shop on Sherman Avenue in North Bend.

The investigation so far indicates the same person is responsible.

The suspect is not the registered owner of the pickup. The owner was found dead in his trailer at the RV park.

Frasier said he had “no doubt” the person died by homicidal violence.

Frasier said it appears the suspect left the cannabis shop and drove to the Big 5 at Pony Village Mall and purchased more ammunition.

How the suspect traveled from Coos to Lane counties is not yet known.

1 dead, 4 others injured in Plover altercation