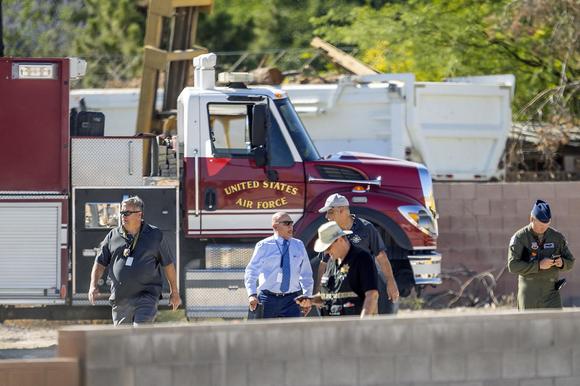 LAS VEGAS (AP) — A civilian pilot killed when a Dassault Mirage F-1 crashed last month near Nellis Air Force Base reported a flight emergency and ejected moments before the jet slammed to the ground and burst into flames, federal crash investigators reported.

No one on the ground was injured crash in northeast Las Vegas, where a witness told the National Transportation Safety Board he saw the jet approach low toward a runway and then “falling out of the sky” while the pilot ejected.

The preliminary NTSB report did not identify pilot Nicholas Hunter Hamilton, 43, of Las Vegas, or provide details about his death. A final report is expected in several months.

Hamilton retired after 20 years as a U.S. Air Force fighter pilot and was employed by Draken International, a military contractor that provides tactical aircraft and pilots for combat training at Nellis and other sites.

The crash occurred while Hamilton returned to the base following weapons school support flights over the vast Nevada Test and Training Range.

In his final turn toward Nellis, he reported a “flap issue” and then declared an emergency, the NTSB report said.

The aircraft missed homes and crashed into two backyards about 1 1/2 miles (2.4 kilometers) from the runway.

Ohio woman cut off in traffic, pulled from car, beaten with hammer in front...

Six people, including 2 teens from San Antonio, killed in horrific accident near Mathis