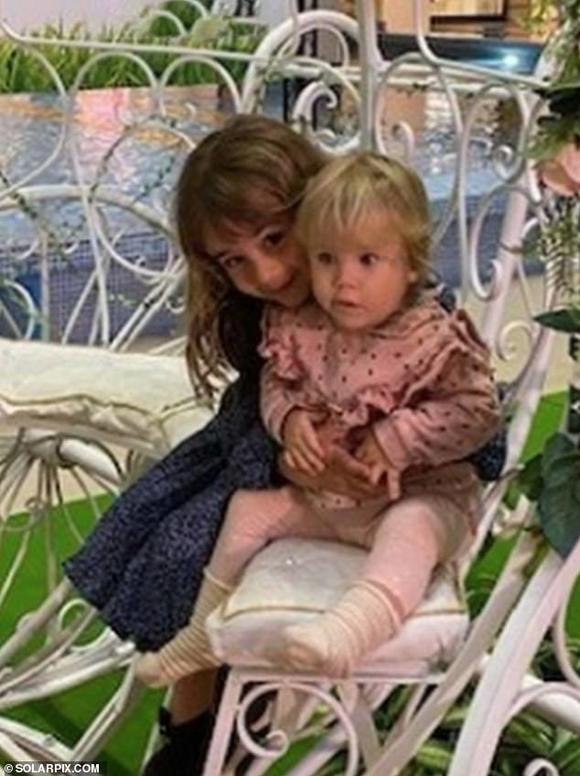 A father drugged and killed his two young daughters at his Tenerife home before putting their bodies in holdalls and throwing them into the Atlantic Ocean with an anchor attached, police said.

Investigators are searching the depths of the ocean for the bodies of fugitive Tomas Gimeno and his one-year-old daughter Anna.

It comes after coroners confirmed that the body of Gimeno’s six-year-old daughter Olivia was found in a sports bag 3,200 down on the Atlantic Ocean seabed off Tenerife.

The bag had been weighed down with an anchor.

The discovery – made three nautical miles off the coast, between the port of Güímar and Santa Cruz de Tenerife – has also sparked fears that the body of one-year-old Anna may never be found after another holdall was found nearby, but with nothing inside.

Overnight it emerged the anchor attached to the sports holdalls came from Gimeno’s boat, found empty off Puerto de Guimar on the east corner of the island just over 10 miles south of the Tenerife capital Santa Cruz hours after he and the girls vanished.

Police investigators have now reached the conclusion Olivia and Anna’s father drugged them and killed them at his home before putting them in separate holdalls, taking their bodies out to sea and throwing them into the ocean with the anchor attached.

Gimeno had been picked up on CCTV loading several bags onto his boat at Marina Tenerife in Santa Cruz the night the girls went missing, although he was alone and a security guard said he had seen no sign of the youngsters.

The girls’ anguished mother Beatriz Zimmerman, who said she remained optimistic about an emotional reunion 24 hours before the ocean bed find, is being kept informed of developments.

Zimmerman, who is divorced from Gimeno, alleges he told her she would never see him or her daughters again in a ‘farewell’ message.

Interpol issued so-called ‘yellow notices’ for the girls last month – a step to help locate missing persons, often minors, or help identify people who are unable to identify themselves.

Police had found no evidence to support the theory the 37-year-old had fled abroad with the infant pair, a hope kept alive by Zimmerman, amid reports he could have taken them to Africa or South America

A search vessel lent to the police by the Spanish Oceanographic Institute called Angeles Alvarino, was today continuing to comb the ocean bed in the area where a child’s body, which is ‘almost certainly’ that of six-year-old Olivia, was found.

A diving bottle and duvet cover belonging to the youngsters’ father had been discovered on Monday more than 3,000 feet underwater near the same area.

Fears are growing that Anna’s body may never be found if she was left in the empty holdall police discovered, although well-placed sources say they remain ‘confident’ of locating her.

It emerged after the abduction that Gimeno had threatened his estranged wife over her new relationship with an older Belgian man named locally as Eric Domb.

He is said to have beaten up Eric, 60, before snatching his daughters in an incident Beatriz and the assault victim decided not to report to police for fear it would inflame an already-tense situation.

Local authorities said from the start all theories were being explored, including the possibility the girls were dead, although their loved ones said they were clinging to the hope they were still alive and a reunion with their mum could still take place.

Privately, detectives had admitted the worst-case scenario was their lead theory.

A minute’s silence was due to take place for Anna and Olivia at midday on Friday in Santa Cruz, as further forensic tests take place to confirm the body found is that of the older girl, although Spanish court officials say it ‘almost certainly’ hers.

A spokesman for the investigating magistrate who is in charge of the ongoing judicial probe sparked by the disappearance of Gimeno with his two daughters Olivia and Anna, said on Thursday evening: ‘Pending more conclusive forensic tests, the body could almost certainly correspond to that of Olivia G, the youngster who vanished on April 27 with her one-year-old sister and their father.

‘The body was found by a robot from the search vessel Angeles Alvarino at midday today around 1,000 metres below the water some three miles off the Tenerife coast.

‘It was inside a sports bag attached to an anchor. Next to it was another empty sports bag.

‘The body was taken to dry land for an autopsy.

‘The vessel called Angeles Alvarino is continuing its search.’

A spokesman for the Civil Guard in Tenerife, the police force which has led the hunt for the missing trio, said soon after the discovery of a child’s body: ‘Today the boat belonging to the Spanish Oceanographic Institute, Angeles Alabrino, which was in Tenerife combing the sea bed following the disappearance on April 27 of Tomas Gimeno with his daughters Anna and Olivia, found human remains.

‘Those remains correspond with the body of a minor and were discovered in the search area that had been determined by investigators.

‘The remains have been taken to the Forensic Medicine Institute in Santa Cruz where they will be analysed for the purposes of identification.’

Jose Manuel Bermudez, the mayor of Tenerife capital Santa Cruz, said: ‘There are no words to express the terrible desolation I feel.

‘From respect at the mother’s pain and with all the caution the terrible news that is reaching us deserves, I want to express to the family all the solidarity of the citizens of Santa Cruz.’

The Canary Islands’ president Angel Victor Torres tweeted: ‘Weeks hoping to receive hopeful news and today we receive the worst possible, one that freezes our soul, about the little girls from Tenerife, Anna and Olivia.

‘Our condolences, encouragement and strength for their mum Beatriz, her family and friends. Canary Islands devastated.’

Local reports claim Gimeno went to Ms Zimmerman’s home at around 5pm on April 27, picking up Anna before collecting Olivia from an after-school German class.

He took both children to his home in Igueste de Candelaria but when the mother arrived later that evening to pick them up again, nobody answered the door.

The pair exchanged a number of phone calls throughout the night, including several later in the evening in which he claimed multiple times that she would never see the children again.

At around 7.30pm, he was seen at the local marina without the children, having loaded suitcases and bags onto his boat.

He made a total of three trips from his parked white Audi A3 to his berthed vessel, El Pais reports, but was stopped at one point by a Civil Guard patrol for breaching a Covid curfew.

He returned to the water again, however, and the empty vessel was then found the following day having dropped anchor off Puertito de Güímar.

The child car seat was found a little later.

Speaking at a women’s forum on Friday, Queen Letizia expressed ‘pain and sadness’ for the deaths of Olivia and a 17-year-old woman killed by her partner in southern Spain earlier this week.

‘I don’t think there is anyone this morning who is not trying to put themselves in the shoes of the people who love these murdered girls,’ Letizia said.

Women’s rights organizations have called for protests later on Friday across Spain against the recent uptick of violence against women.

Spanish PM Pedro Sanchez tweeted: ‘I cannot begin to imagine the pain of the mother of little Anna and Olivia, who disappeared in Tenerife, following the terrible news we have just heard.

‘I send a hug and my love and that of my whole family, who today show solidarity with Beatriz and her loved ones.’

Spain‘s Equality Minister Irene Montero said: ‘There are no words to accompany Beatriz at these moments of terrible pain.

‘This violence committed against mothers to hit them where it hurts the most is a question of state.

‘We are here for what is needed.’

She finished her tweet with the hastag #Nomasviolenciavicaria, referring to the name given to the horrific type of inter-family violence that involves aggressors using their children to increase the suffering of their partners.

A huge social media campaign was launched when the disappearance first emerged, in a desperate effort to help and support the girls’ mother.

The appeal was backed by a number of high-profile figures, including football star Cristiano Ronaldo’s partner Georgina Rodriguez.

In a post to her 24 million Instagram followers, Ms Rodriguez wrote: ‘I want to use my reach on this great social network to make sure this reaches as many people as possible.

‘These are two sisters who are being searched for in Spain and abroad. They are called Olivia and Anna and are aged six and one.

‘Their mum is seeking maximum publicity for this video to try to find them as soon as possible and bring them home.

‘I hope with all my heart that the girls are found safe and well and can hug their mum again soon.’

Santiago Segura, a well-known Spanish filmmaker and actor tweeted: ‘My brain cannot assimilate something this horrible.

‘That someone can do something like this makes me ill, that a father can do this makes my head explode.’

2 dead, 2 injured in shooting at a metro Atlanta gas station, as many as 50 shots were fired

A man is killed after his car collides with a utility pole in Weisen...

Fight leads to a fatal shooting at a Jacksonville gas station