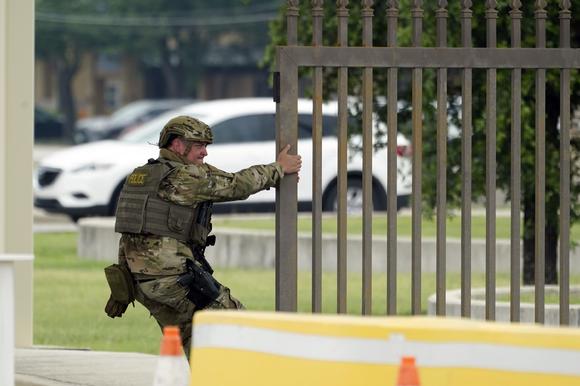 San Antonio’s Lackland Air Force Base was briefly under lockdown midday after authorities reported an active shooter situation after hearing reports of shots fired near the Texas base.

The lockdown has since been lifted and there are no reports of injuries, Joint Base San Antonio-Lackland spokesperson Lt. Col. Brian Loveless said at a press conference.

Loveless said a call came into dispatch shortly before noon today reporting gunshots from off-base, “allegedly coming into the installation at one our facilities,” but said initial investigations “didn’t determine anything up front.”

Loveless said the military is “trying to investigate a couple of leads to confirm that gunshots actually did take place on the installation.”

JBSA had tweeted that its emergency responders are working with the San Antonio Police Department to search for two at large shooters, but Loveless walked back that claim.

“No reports of anybody visually seen firing firearms on the installation” Loveless said, adding that JBSA’s own report of two shooters was “not confirmed.”

“Anybody can call in a report of gunshots fired into our dispatch,” Loveless said. “I would rather overreact to something than under-react, and get it right.”

Photos posted to social media showed lines of cars after authorities closed a road near the base.

the alert about the shooting went out just before 12:30 p.m. local time.

An active duty service member currently on lockdown at JBSA who was contacted by NBC News through text message said they were outside at the time of the shooting.

“All we heard was a staff member run out of a building and tell us that there was an active shooter on base and to get into our rooms,” they wrote. “I do not live on this base so I ran to a friends room and hid there and I am continuing to stay there now.”

US raises penalties for mask violations on planes, transit