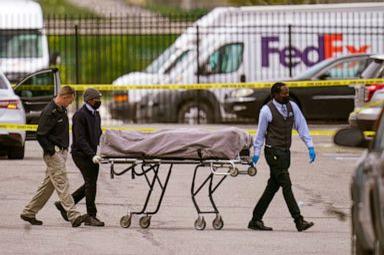 Eight people were shot and killed and several others were injured in a mass shooting at a FedEx facility in Indianapolis, according to authorities.

When officers arrived at the FedEx facility near the Indianapolis airport just after 11 p.m., they found a “chaotic and active crime scene,” McCartt said.

“This suspect came to the facility … he got out of his car and pretty quickly started some random shooting outside the facility. There was no confrontation with anyone,” McCartt said. “That began in the parking lot and then he did go into the building.”

Four victims were found outside and four were inside, police said.

Five people were transported from the scene, McCartt said. Four of those people suffered non-fatal gunshot wounds, he said.

Paul Keenan, special agent in charge of the FBI Indianapolis Field Office, said “with less than 12 hours since the shooting, it would be premature to speculate” on a motive.

Authorities have not identified the suspect, but three sources briefed on the investigation said he is believed to be Brandon Scott Hole. Officials are scouring his social media and electronic devices for information that could suggest a motive, sources said.

There is no indication that the shooting is connected to terrorism, two law enforcement officials said.

Police said they believe the suspect had a rifle.

The names of the victims have not been released.

‘They had no choice.’ Expert weighs in on malls’ youth supervision policies

Honolulu police shoot, kill man who walked into a home

Bears to start Fields in preseason finale, Dalton in Week 1