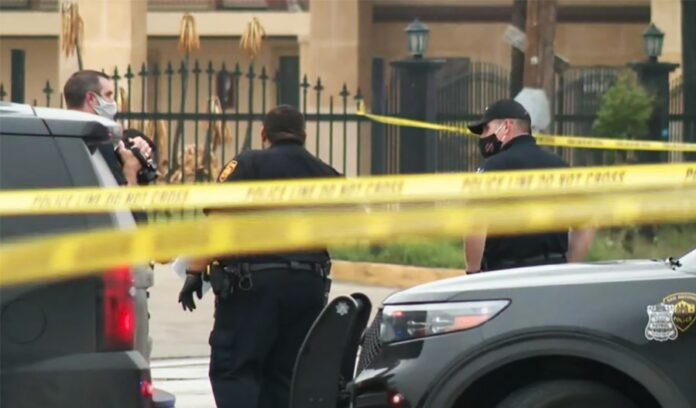 Two people were killed and a police officer and a third person injured after an officer pulled over a car for a traffic stop and “casual conversation” escalated to gunfire, police said.

Police Chief William McManus, basing comments on bodycam video without audio that he watched after the shooting, said the driver pulled a gun and began firing at the officer and the officer was hit in his hand. There were three people in the car.

McManus, who emphasized his comments were preliminary, said a passenger and the driver were shot and another passenger was taken to the hospital also with a gunshot.

Images showed a young woman in a stretcher.

The news station reported she had been shot in the chest. McManus told reporters at the scene that she was the third person in the car.

“The officer is very, very lucky to be alive at that close range, having been shot in the hand and not somewhere else,” McManus said.

The shooting comes one day after a gunman opened fire at the San Antonio International Airport. The gunman was killed by a police officer who confronted him as he was driving the wrong way.

The gunman was killed. There were no other injuries, but the airport and areas around it went into lockdown. Officials said he matched the description of a man who had been shooting from a highway overpass.

“Then at some point, I’m not sure why, the driver pulled a gun and started firing at the officer,” McManus said. Shots hit the officer’s hand and possibly his radio.

McManus said the officer, who he did not immediately identify, has been on the force five years and was alone when he stopped the truck. McManus did not know the officer’s condition. He said the two people killed were male.

The officer, despite his hand injury, managed a reload of his firearm, McManus said.

Winsome Sears: ‘I am the embodiment of what we’re trying to achieve in America’

Blacks, Indians and Pakistanis are more likely to die in Corona