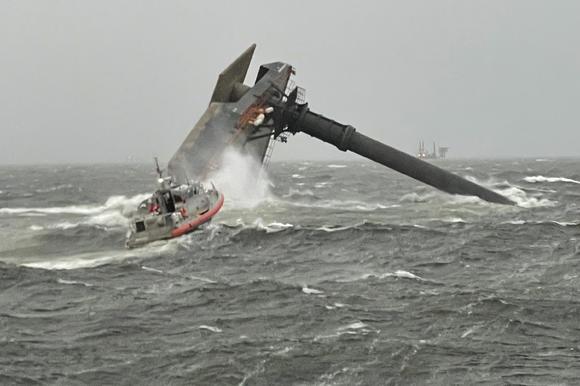 GRAND ISLE, La. (AP) — The Coast Guard and multiple other boats have rescued six people from a commercial platform vessel that capsized off the coast of Louisiana and are still searching for more, the agency said Wednesday.

The U.S. Coast Guard Heartland said in a statement at around 8 p.m. that it and several other vessels responded to an area of the Gulf of Mexico south of Grand Isle after the 129-foot (39-meter) Seacor Power overturned. A search plane also flew in to assist.

The Advocate reported that Lafourche Parish President Archie Chaisson III confirmed that 18 people were on board before the Seacor Power took on water in rough seas.

The Seacor Power is a commercial lift vessel, designed to become an offshore platform by dropping three towering legs down to the sea floor. Hit by the storm, it flipped over, with one of the legs pointed awkwardly skyward at an angle as rescuers searched for the workers.

New Orleans and areas off Louisiana’s shore were being hit by an unexpectedly strong storm that overturned vessels and damaged property, particularly in coastal towns. The Coast Guard warned in a Facebook post that the storms caused “significant hazards to life and property.

2 killed in a plane crash in Pembroke Park