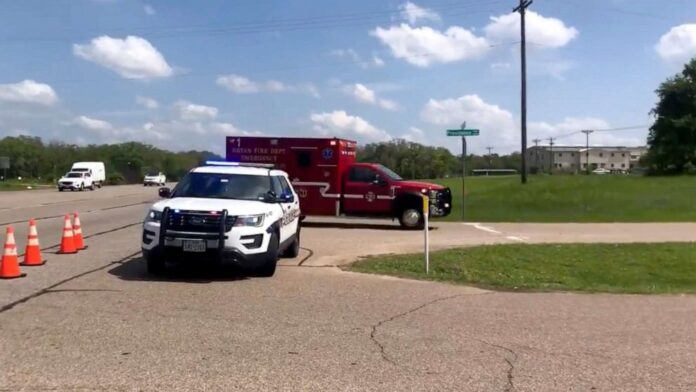 A manhunt is underway for the person who opened fire at a business park in Bryan, Texas, killing one person and injuring five others.

Bryan Chief of Police Eric Buske said shortly before 5 p.m. that a person who they believe to be an employee of Kent Moore Cabinets showed up at the company’s headquarters and began shooting near the warehouse

One person died at the scene while five others were hospitalized for gunshot wounds — four of those patients are in critical condition. A sixth person was also hospitalized after suffering an asthma attack.

According to Buske, the shooter was gone by the time officers arrived at the warehouse moments after the first call was received.

Buske said the Texas Department of Public Safety may have taken the shooter into custody following an incident near Iola, which is about 20 miles away, but that the information had not yet been confirmed.

Earlier in the afternoon, Lt. Jason James with the Bryan Police Department said the first call about the shooting came at about 2:30 p.m. at a business on the 300 block of Stone City Drive and that there were “several victims.”

The victims were transported to St. Joseph Health Regional Hospital.

A motive for the shooting has not yet been confirmed.

Bryan police said during an informal news conference that the scene of the shooting is secure and that witnesses are currently being interviewed.

A manhunt is underway for the person who opened fire at a business park in Bryan, Texas, Thursday afternoon, injuring several people.

A man is shot dead in a possible home invasion, and robbery is in...