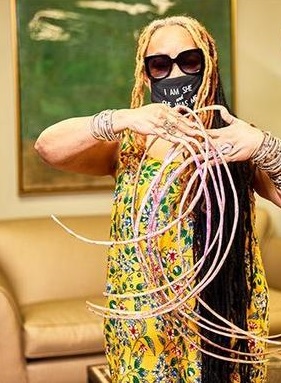 (UPI) — The holder of the Guinness World Record for longest fingernails on a pair of hands broke her own record one last time before cutting her nails for the first time in nearly 30 years.

Ayanna Williams of Texas first held the record in 2017, when her fingernails were measured at a total 226.9 inches, and they were measured again before being cut and the new record stands at 288.8 inches.

Williams’ nails will now go on display at the Ripley’s Believe It or Not! Orlando Odditorium in Florida.

“It’s going to feel like it’s a wax [sculpture] of myself. Even though it’s just my nails, it’s going to be awesome. I can’t wait to see that,” Williams told Guinness.

“Guinness World Records and Ripley’s Believe It or Not! are really on it. I’d rather for them to have them than anyone else. And one thing, it’s history for my kids and my grandkids. It’s very exciting.”

Britney Spears rolls around topless in the sand, sea on vacation

In his dad’s footsteps, Michael Gandolfini finds his own way

‘Get the vaccine, it’s our best shot’: Bill Self and KU send message to...