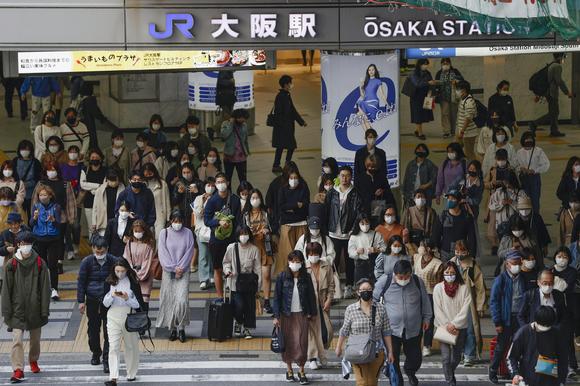 TOKYO (AP) — Japan designated Osaka and two other areas for new virus control steps as infections in those areas rise less than four months before the Tokyo Olympics.

Osaka, neighboring Hyogo and Miyagi in the north have had sharp increases in daily cases since early March, soon after Japan scaled down its partial and non-binding state of emergency that began in January. Japan lifted the state of emergency in the Tokyo area on March 21, fully ending the measures aimed at slowing the coronavirus and relieving pressure on medical systems treating COVID-19 patients.

Experts have raised concerns about Osaka’s rapid spike and the burden on its medical systems.

An international figure skating championship is scheduled in April 15-18 in Osaka city, where skaters from five countries are to participate. The Olympic torch relay is also scheduled to pass through Osaka city in two weeks.

“Personally, I think the Olympic torch relay in Osaka City should be canceled,” Osaka Gov. Hirofumi Yoshimura said, noting that virus prevention steps such as social distancing and avoiding non-essential outings should be ensured rather than hosting the event.

Torch relay organizers have already asked people to keep social distance, wear masks and refrain from cheering when runners pass. They have said they will reroute or cancel legs of the relay if needed.

Economy revitalization minister Yasutoshi Nishimura said the three prefectures would be designated for semi-emergency status under a new rampancy prevention law beginning next Monday for one month.

The law enacted in February is designed to target specific municipalities as a pre-emergency measure and allows prefectural leaders to request or order business owners to shorten operating hours and take other steps. It allows compensation for those who comply and fines for violators.

Japan has so far managed the pandemic much better than the United States and Europe without imposing a binding lockdown. But Prime Minister Yoshihide Suga’s government has been struggling to control the spread of the virus while minimizing damage to the economy.

Japan had 474,773 cases and 9,162 deaths as of Wednesday, according to the health ministry. Osaka reported 599 daily new cases Wednesday, surpassing Tokyo’s 414.

Cases in Tokyo has also been on the rise. The capital city on Thursday reported 475 new cases. Tokyo Gov. Yuriko Koike warned that a situation like in Osaka “can happen here at any time.”

Government advisers say cases are increasing in parts of the country, including western and northern Japan, and variants that are believed to be more contagious are rising rapidly in the Osaka region.

Hyogo Gov. Toshizo Ido told reporters his prefecture has faced sharp upsurges since early March, especially in Kobe and a few other cities where the majority of new cases were from variants.

He also noted that younger generations, including children, are being infected, another possible sign that the variants are behind the spread.

A 21-year-old man was shot dead at a Shell gas station in Humboldt Park,...

3 dead in an apartment in Jacksonville; Several were arrested after the chase