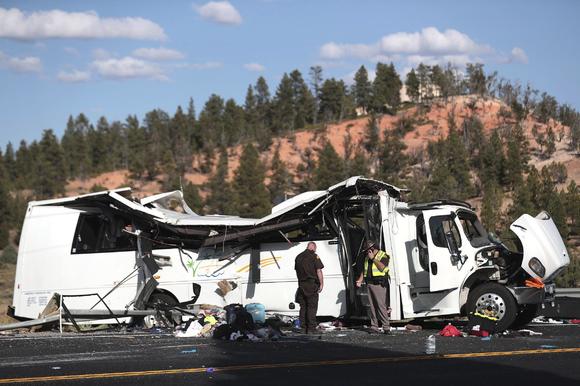 SALT LAKE CITY (AP) — A tour bus that crashed and killed four Chinese tourists near a national park in Utah in 2019 had problems earlier that day with the engine not starting, according to a new documents released by U.S. authorities investigating the incident.

The driver of the bus had to do a video call from a gas station with his boss, who told him to crawl under the bus and give the starter “two good hits.” That worked, and the bus started, according to new documents released by the National Transportation Safety Board detailing the investigation.

Soon after, the driver lost control of the bus and veered off the road when he tried to correct course on Sept. 20, 2019 near Bryce Canyon National Park. The bus rolled, hitting a guard rail, crushing the roof and throwing people from the vehicle.

All 30 passengers were hurt, with 17 suffering serious injuries and nine minor injuries. As is common in tour buses, not everyone was wearing a seatbelt.

The report doesn’t provide a probable cause for the crash or explain what role, if any, the previous problem played in the incident. The detail about the engine problem is included in one of dozens of documents posted online by NTSB.

The 2017 bus, operated by a tour company out of Southern California that catered to Chinese tourists, appeared to be up-to-date on its inspections and maintenance, the documents show.

The driver had started working for the tour company nine days before the crash, but he told investigators he had two and one-half years experience driving similar buses for a different tour company.

He said the section of road felt different than when he last drove it months earlier with the previous company, describing it as “slippery,” according to a transcript of his interview with investigators. There had been no rain or snow in the last 24 hours in the area, however, the report said.

He insisted to investigators that he didn’t steer as the bus tilted back and forth and eventually flipped, attributing the loss of control to the road being what he said felt like had been “newly paved.”

A new chip seal on the road’s surface had been applied to the road a month before the crash, NTSB said in the documents.

“I’m always driving there, and it’s the seventh time I drive past there. I can tell it’s newly paved,” he told investigators through a Mandarin interpreter. “I feel the car was out of control even I did not move the steering wheel. And I feel it’s very slippery, the road is.”

He didn’t have any drugs or alcohol in his system, a toxicology report showed. His licenses required to drive tour buses were valid at the time of the accident. He was also driving within the speed limit: 64 mph (103 kph) in a zone with a 65 mph (105 kph) speed limit.

He told investigators he wasn’t looking at his phone or any GPS device at the time of the incident and cellphone records obtained by investigators show the last activity on his phone was one hour before the crash.

The driver, whose name is not in the report, was cited for failure to maintain lane, the document reveals.

Documents show that crashes aren’t very common on this curved stretch of road. Over a 10-year period from 2009-2018, there were four crashes on a stretch of road that gets about 2,300 vehicles daily.

The group of older adults from China was on a seven-day tour that started in Los Angeles and was set to end in Salt Lake City. The bus crashed only a few miles from Bryce Canyon National Park, which is known for its intricately shaped red-rock spires called hoodoos.

The southern Utah park that is about 300 miles (480 kilometers) south of Salt Lake City drew nearly 2.6 million visitors in 2019.

A man who was driving the opposite direction told investigators he saw the bus driving what seemed to be fast and then get too wide around the curve before trying to correct. Then, the bus flipped and rolled several times toward his car, pieces of the bus flying everywhere, he said.

The man jumped out of his car and saw “bodies strewn all over the place” and called 911 while he began helping wounded people using a first aid kit he had.

He said complicating rescue efforts was the fact that the tourists didn’t speak English and he and others who tried to help didn’t speak Mandarin. Eventually someone arrived who spoke Mandarin.

Passengers interviewed by investigators after the crash remembered seeing the driver under the bus trying to fix the problem, leading some to say that made them think the bus wasn’t in good condition.

Their interviews reveal the horrific experience for passengers.

Several reported hearing a strange noise in the moments before the bus began to shift from side-to-side and flipped. One man told investigators the driver had trouble throughout the trip steering too hard back-and-forth.

One man recalled stumbling out of the bus, his nose bleeding, and seeing bodies and people laying all over the ground. He went looking for his wife and found her yelling for help, half her body outside the bus but one leg stuck to something inside.

He told investigators he remembers seeing three men standing over the bodies of their wives.

One man said, “She’s gone, she’s gone, what am I going to do?” Another husband started yelling at the bus driver, who suffered minor injuries in the accident.

“You know this car has issue; why don’t you stop it?” the man yelled, according to another passenger watching. “Now they’re all gone.”

Two charged in death of man, 73, during Chicago carjacking