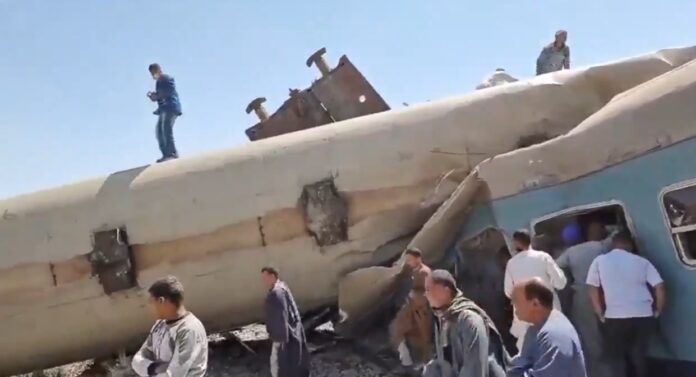 32 people have died and 66 injured after two trains crashed head on in the Egyptian province of Sohag, according to a statement by Egypt’s heath ministry.

Dozens of ambulances were sighted at the scene, where images reveal that two trains had been completely derailed over a body of water.

Many passengers were left trapped under the wreckage, as per video footage taken at the scene, with other people seen trying to pull them to safety.

Some victims appeared to be unconscious, while others were bleeding from their injuries. Bystanders helped to carry bodies from the wreckage, laying them out on the ground close to the site of the collision.

The railway system in Egypt ‘has a history of badly maintained equipment and poor management’.

Official figures reveal that 1,793 train accidents took place in 2017 alone in Egypt, while in 2018, a passenger train derailed close to the southern city of Aswan. At least six people were injured in the accident, which led to authorities firing the chief of Egypt’s railways.

https://platform.twitter.com/embed/Tweet.html?dnt=false&embedId=twitter-widget-1&frame=false&hideCard=false&hideThread=true&id=1375421566385799168&lang=en&origin=https%3A%2F%2Fwww.unilad.co.uk%2Fnews%2Fat-least-32-people-dead-and-84-injured-after-two-trains-crash-head-on-in-egypt%2F&siteScreenName=UNILAD&theme=light&widgetsVersion=e1ffbdb%3A1614796141937&width=550px Also in 2018, there was a deadly collision between a passenger train and a cargo train, which left at least 12 people dead, including a child.

The very next day after the accident, President Abdel-Fattah el-Sissi stated that the government didn’t have the approximate 250 billion Egyptian pounds, or $14.1 billion, required to overhaul the insufficient railway system.

The year before, 43 people died after two passenger trains collided just outside of the Mediterranean port city of Alexandria, while at least 51 people die when two commuter trains crash near Cairo in 2016.

The deadliest train crash in Egypt happened in 2002, when more than 300 people die after fire erupted in a speeding train which had been headed southern Egypt from Cairo.

Our thoughts are with all those affected by the train collision in Sohag, Egypt.

A person shot by police in Doulton