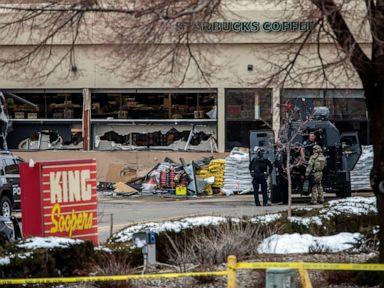 A total of 10 people were killed, including a police officer, after a suspect opened fire at a King Soopers grocery store in Boulder, Colorado, police said.
The officer has been identified by police as Eric Talley, 51. He had been a part of Boulder Police Department since 2010.
A law enforcement source told ABC News officers initially responded to a report of someone being shot in the parking lot of the store, and when they arrived at the scene, a suspect carrying a long gun opened fire on them. Talley was the first officer to arrive at the scene, where he was fatally shot.
The gunman was wounded during the confrontation with police and taken into custody, according to Boulder Police Department Commander Kerry Yamaguchi.
“Our hearts … go out to the victims of this horrific incident,” said Boulder Police Chief Maris Herold at a Monday night news conference, praising Telley for his “heroic action” in responding to the incident after the police department received phone calls of shots fired and of a “possible person with a patrol rifle.”
“Officer Telley responded to the scene, was first on the scene, and he was fatally shot,” Herold said.
Tactical police units respond to the scene of a King Soopers grocery store after a shooting, in Boulder, Colo.
Several other law enforcement agencies soon arrived at the scene, including the state SWAT team.
“Without that quick response, we don’t know if there would have been more loss of life,” Yamaguchi told reporters at a news conference.
The commander and Boulder District Attorney Michael Michael Dougherty said at the news conference that they will be releasing more information on the deceased victims, including the exact number of victims, within the next few hours, as they are still notifying families.
The suspect was not immediately identified by officials, but they said he was sent to an area hospital to be treated for his injuries.
Yamaguchi did not reveal a motive, but said there are no additional suspects at this time.
Ambulances and responders gather near the site of a reported shooting in Boulder, Colo..
The Boulder Police Department took to Twitter at 2:49 p.m. local time to warn residents of an “active shooter” and tell them to stay away from the area.
Then, at 7:10 p.m. ET, they tweeted out an alert asking people about three miles from the shopping center “to shelter in place” while officers responded to a report of an “armed, dangerous individual.”
The order was lifted around 8:41 p.m. ET, and Yamaguchi said it was not connected to the store shooting. The investigation is ongoing, and police said anyone with information about the incident should call 303-441-3333.
Eyewitnesses shared videos from the parking lot of the King Soopers grocery store on social media. The videos show officers ordering a suspect to come out of the store with his hands up and surrender. Videos from inside the store show shoppers and employees trying to flee or hide.
Andy Arellano, a store employee, said he was concerned for his co-workers and shoppers as shots rang out.
“We were like sitting ducks, you know, and that’s one thing that I’m reliving it and looking at it in my head. And that, that bothers me, I’m still shivering, I’m still shaking,” he said.
Eyewitness Andrew Hummel told KMGH he was at a store when he heard the gunshots and ran out of the shopping center with others.
“Everybody kind of sprinted toward the back of the store,” Hummel told the station.
Hummel said his roommate, who works at the store where the shooting happened, went to a storage room and hid there with some customers, texting Hummel and others updates.
“Yeah, I think one of the biggest scary text[s] that he sent he just said, ‘I love you guys, like thank you for everything, in case, like, things go bad,'” Hummel said. “That was a really hard text … that’s something that I would never want to hear from any of my friends, because I knew the seriousness of what was going on and I was horrified. It was truly horrifying.”
Sarah Moonshadow, another eyewitness, told the station she was in the supermarket with her son when she heard four gunshots.

The death of a woman with gunshot wounds is suicide – but has her...

Mobile phones keep tracking your location without consent, but a new system can finally...

Shooting leaves one person dead near 19th and Vine