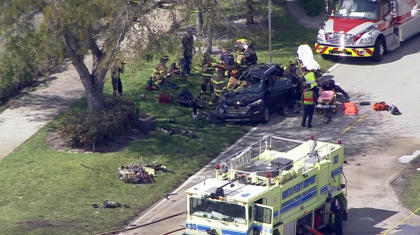 A small plane has crashed next to North Perry Airport in Pembroke Pines, killing two people, but not before it struck a nearby car.

According to a Pembroke Pines Fire Department spokesperson, the crash took place in the area of SW 72 nd Avenue and 13 th Street.

The FAA says the single-engine Beechcraft Bonanza crashed shortly after takeoff around 2:00 p.m.

In video from Chopper 4, fire rescue crews could be seen spraying foam on the wreckage of the plane.

It’s not known what caused the crash but the Pembroke Pines Fire Department spokesman said possible engine trouble was reported.

On its way down, the plane struck a car in the street right next to the airport.

A woman and child inside the car were transported to a local hospital. Their conditions are not known.

Emergency crews tend to someone in a car that crashed near the scene of a plane crash at North Perry Airport in Pembroke Pines Southbound and northbound lane of SW 72 nd Avenue between 11 th Street and Pembroke Road are being affected.

The FAA and National Transportation Safety Board will investigate. The NTSB will be in charge of the investigation and will provide additional updates.

A man, 61, died in a hit-and-run accident near Kearny Mesa