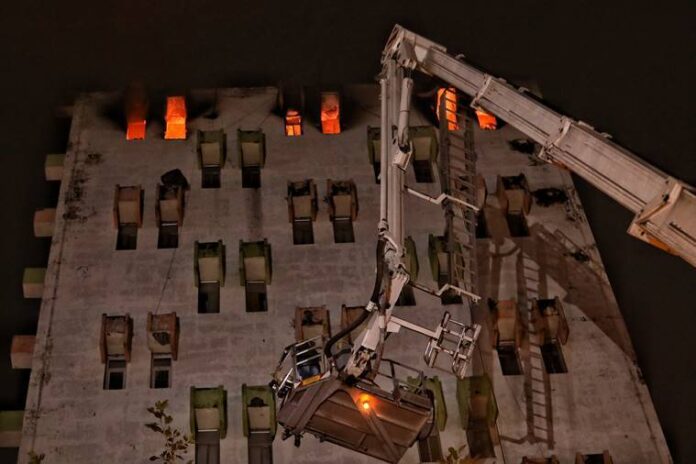 seven persons were killed after a major fire broke out on the 13th floor of an Eastern Railway building in Kolkata’s Strand Road.

“We could only reach up to the sixth floor, after which nothing was visible. Though the fire has been brought controlled, a rescue team has gone inside and search and rescue operation is on. Ascertaining the actual number of deaths and injuries will only be possible once the rescue team comes out,” said Firhad Hakim, administrator of Kolkata Municipal Corporation and State Minister.

Commissioner of Police Soumen Mitra, Fire Minister Sujit Bose, Joint CP (crime) Murlidhar and other senior police personnel and officials were at the spot and were later joined by Chief Minister Mamata Banerjee. The CM announced Rs 10 lakh compensation and a job to the next of kin of those who died.

“Seven persons have died. Our fire officials, RPF, police have lost lives. They were in the elevator and got trapped in the fire. Though deaths can’t be compensated, we have announced Rs 10 lakh for the family of the deceased and one government job for a family member. The building is a railway office. I thought someone from their side will be here but I have enquired, no one came. Railways are also accountable. We wanted a building plan but didn’t receive cooperation in that too, I have been informed. I don’t want to politicise the tragedy,” Banerjee said.

Ten fire tenders were rushed to the spot initially. To help with the operations, Officer-in-charge of Hare Street police station with additional force, a High Radio Flying Squad and the Kolkata Police’s Disaster Management Team arrived later. Police control room vans have been diverted to the area.

Traffic from Babughat to Howrah has been severely affected. The incident took place around 6:10 pm. Fire officials said that hydraulic ladders and skylifts were used to control the fire. Most of the floors were evacuated in time with the help of police and fire officials.

“Eastern Railways will do a top-level enquiry under the leadership of the Chief Safety officer,” said Kamal Deo Das, Chief Public Relations officer of Eastern Railways.

Man, 46, dies after falling from roof next to apartment

A man was killed in a shooting attack in Minneapolis

Fiery car crash along I-85 in Gwinnett leaves 4 dead