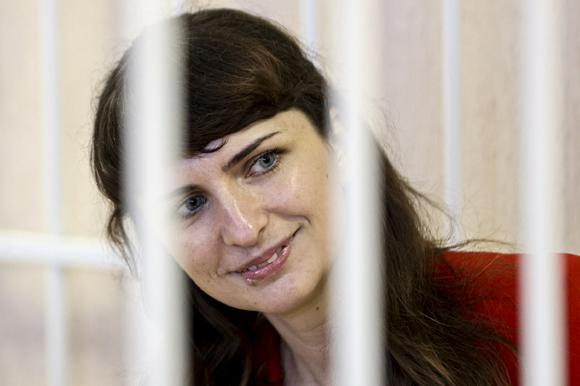 KYIV, Ukraine (AP) — A court in Belarus handed a half-year prison sentence to a journalist on charges of revealing personal data in her report on the death of a protester, part of authorities’ crackdown on demonstrations against authoritarian President Alexander Lukashenko.

Katsiaryna Barysevich of the independent Tut.by online news portal has been in custody since November, following the publication of an article in which she cited medical documents indicating that protester Raman Bandarenka died of severe injuries and wasn’t drunk — contrary to official claims.

Bandarenka died in a hospital on Nov. 12 of brain and other injuries. The opposition alleged that he was brutally beaten by police who dispersed a protest in the Belarusian capital, Minsk. Bandarenka’s death caused public outrage and fueled more demonstrations.

On Tuesday, the Moskovsky District Court in Minsk sentenced Barysevich to six months in prison and a fine equivalent to $1,100. It also handed a two-year suspended sentence to Artsyom Sarokin, a doctor who treated Bandarenka and shared his medical records with Barysevich, and fined him the equivalent of $550.

Belarus has been shaken by protests ever since official results from the Aug. 9 presidential election gave Lukashenko a sixth term in office by a landslide. The opposition and some poll workers have said the election was rigged.

Lukashenko’s government has unleashed a sweeping crackdown on post-election protests, the biggest of which attracted up to 200,000 people. Human rights activists say more than 30,000 people have been detained since the demonstrations began, with thousands beaten.

The United States and the European Union have responded to the election and the crackdown by introducing sanctions against Belarusian officials.

Sviatlana Tsikhanouskaya, the main opposition challenger in the vote who was forced to leave the country under pressure from authorities, said that Tuesday’s sentence demonstrated that “the truth has become a crime for the regime.”

“Lukashenko’s resignation and new elections are needed to end the horrible political and legal crisis,” Tsikhanouskaya said. “We are confident that after he steps down all those who were convicted on political grounds will be rehabilitated.”