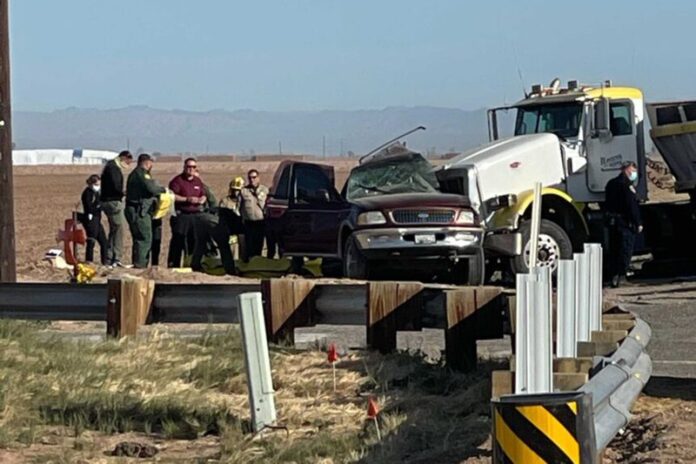 According to the El Centro Regional Medical Center (ECRMC), 27 passengers were riding in an SUV that crashed into a semi-truck full of gravel this morning.

KYMA says at least 14 people died on the scene. Three were flown out, seven people were transported to the ECRMC, where one, unfortunately, passed away, bringing the death toll of the crash to 15. Two patients were taken to Pioneers Memorial Hospital.

Imperial County law enforcement is still at the scene, near the intersection of Highway 115 at Norrish Road in Holtville.

An SUV packed with people crashed into a semi-truck in Imperial County, California,, leaving 15 dead, hospital officials said. A vehicle was traveling westbound on Norrish Road near State Route 115 when it traveled “in the direct path” of a big rig truck traveling northbound on the 115, California Highway Patrol officer Arturo Platero said. The cause of the crash is under investigation.

the SUV packed with people crashed into a semitruck in Imperial County, California, leaving 15 dead and others hospitalized, hospital officials said.

There were 27 passengers in the SUV that struck a semitruck full of gravel, said Judy Cruz, the managing director of the Emergency Room Department at El Centro Regional Medical Center.

She said 14 people were dead on the scene, and another person died shortly after arriving at the hospital. Other passengers are being treated at El Centro Regional Medical Center and at Pioneers Memorial Hospital in nearby Brawley.

Patients are going through a difficult time as you can imagine,” El Centro Regional Medical Center CEO Adolphe Edward said. “This was a major accident and we are taking care of them in the emergency room department.”

California Highway Patrol Officer Arturo Platero said the vehicle was westbound on Norrish Road near State Route 115 when it traveled “in the direct path” of a big rig truck traveling northbound on 115. The cause of the crash is under investigation.

Imperial County Fire officials said multiple agencies were responding to the crash, which is being treated as a mass casualty event.

At least 15 killed in crash with semitruck in Southern California

Trump announces launch of his very own social media site

Temblor brewing up special beer in honor of firefighters to raise money for 9/11...