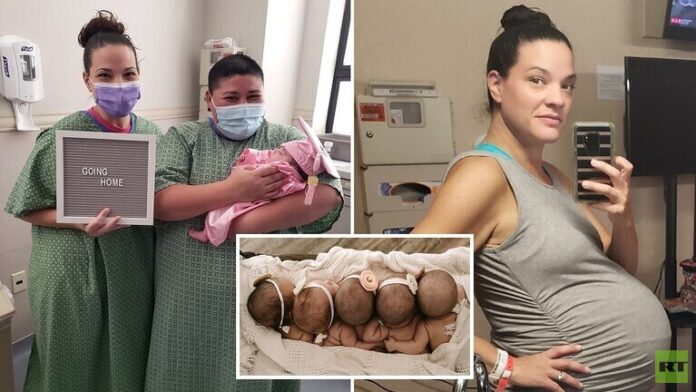 Deciding to have another baby so their family could grow, Priscilla and Heather became the parents of 5 other children, all of them female.

Heather Langley, 39, and her partner Priscilla Langley, 35, both from Texas, welcomed their five daughters, Hadley, Reagan, Zaria, Zilla and Jocelyn, and the babies are the second group of quintuplets to be registered in the United States.

The couple, who had been together for 9 years, gave birth to their eldest daughter, Sawyer, and after 3 years they decided to try to conceive another child using IVF. And surprisingly, they ended up having 5 children.

Heather was 6 weeks pregnant when they discovered that she had five babies in her stomach, and they were born at 28 weeks by an emergency caesarean section.

“At first the doctors saw only 4 pregnancy bags, but later they found the fifth vesicle … I was immediately scared when we discovered that there would be 5, because I was afraid that my pregnancy would be worrying and complicated,” says Heather.

She added, “I also panicked about how we would take care of five children, and how we would choose and agree on five names, let alone one .. However, after the initial shock, I realized how special and unique our children would be. It looks like we won the lottery.”

The couple used the IUI method again for insemination, the same fertility treatment they used with the first child, but they were unable to use the same sperm donor, because it was not available.

And intrauterine insemination (IUI) is a fertility treatment method, whereby washed and concentrated sperms are placed directly in the uterus, at a time when the ovaries releases one or more eggs to be fertilized.

Paralympic Classes: A confusing maze in search of fairness

Bakersfield’s mayor had a front-row seat for the terror of 9/11, and the fear...

A stabbing attack in Texas, killing one person and wounding 3 others