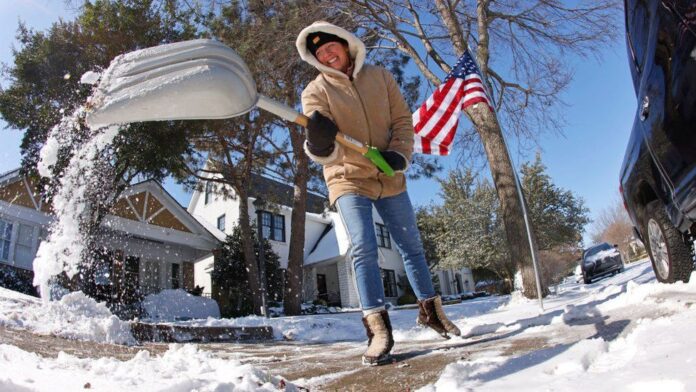 In Texas, a surge in demand for electricity has led to widespread power cuts. The state is bracing for another icy storm.

Kentucky, Mississippi, Alabama and Oklahoma are among states affected.

The north-west state of Oregon has also seen severe weather.

The freezing storm even reached northern parts of Mexico where more than four million homes and businesses lost power.

US President Joe Biden has approved a a state of emergency in Texas, which has seen some of its coldest temperatures in more than 30 years – some areas hit 0F (-18C).

The high demand for electricity in the state has caused the power grid to fail. Rolling blackouts have been imposed in some areas to conserve power for hospitals, police and fire stations, leaving several million people without electricity.

The crisis was worsened when nearly half the state’s wind power generation was knocked out by the storm on Sunday. Wind power is the state’s second-largest source of electricity.

Icy roads have also led to a spate of traffic accidents and people have been advised to avoid travel where possible.

In Houston, nearly 120 road crashes were reported on Sunday alone. A pile-up on a major highway near Oklahoma City during a snowstorm left several lorries on fire.

The George Bush Intercontinental Airport in Houston and the city’s Hobby Airport were both closed.

Travellers in several states were warned that flights could be delayed or cancelled.

Texas Governor Gregg Abbott has urged “all Texans to remain vigilant against the extremely harsh weather”.

Temperatures in the city of Dallas have been colder than in Anchorage, Alaska, CBS News reported.

The NWS said unusual meteorological conditions had allowed an “Arctic outbreak” that originated just above the US-Canada border to spill out into and across the US.

“Hundreds of daily low maximum and minimum temperatures have been/will be broken during this prolonged ‘polar plunge’, with some February and even all-time low temperature records in jeopardy.”

Up to 12in (30cm) of snow are expected across parts of the southern Plains – the large area that spans parts of Texas, Oklahoma and Kansas – according to NWS meteorologist Marc Chenard.

“Typically, we just don’t have quite this much cold air in place that far south,” he said.

In Louisiana, some local authorities have imposed curfews to keep people off the icy roads. The state is also suffering power cuts and traffic disruption.

Jacksonville police said an unborn child is dying after a pregnant mother was shot...

A pregnant woman shot dead while sleeping in a Connecticut home