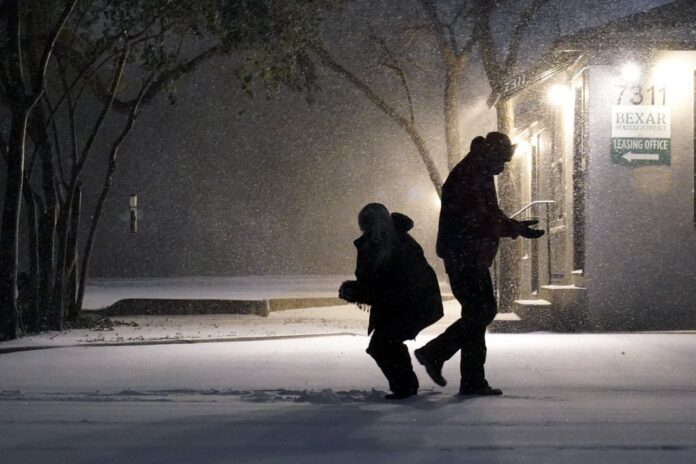 DALLAS (AP) — A winter storm dropping snow and ice also sent temperatures plunging across the southern Plains, prompting a power emergency in Texas a day after conditions canceled flights and impacted traffic across large swaths of the U.S.

Rotating power outages were initiated by the Electric Reliability Council of Texas, or ERCOT, early Monday morning, meaning thousands went without electricity for short periods as temperatures fell into the teens near Dallas and 20s (about minus 5 degrees Celsius) around Houston.

“We urge Texans to put safety first,” the council tweeted as it urged residents to reduce electricity use. ERCOT manages the flow of electric power in the state.

“Traffic lights and other infrastructure may be temporarily without power,” ERCOT said.

The council described the rotating outages as a “last resort to preserve the reliability of the electric system as a whole,” adding that utility transmission companies are tasked with determining how to reduce demand on the system.

“Every grid operator and every electric company is fighting to restore power right now,” ERCOT President and CEO Bill Magness said in a statement.

The rotating outages were expected to last throughout Monday morning.

More than 1.6 million customers were in the dark as of 5 a.m. local time, according to poweroutage.us, a utility tracking site.

Around 5,000 Oklahoma Gas & Electric customers were without power overnight, and Entergy Arkansas logged about 3,000 outages. Both states have much smaller populations compared to Texas.

Officials in Houston had warned people to prepare for outages and hazardous roads — conditions similar to what residents might see in the wake of a Category 5 hurricane.

“There (have) been numerous reports of accidents from icing recently,” National Weather Service lead forecaster Bob Oravec said Monday. “I think there’s going to be a big threat today as the system pushes northeastward.”

Accumulating ice between a tenth and a quarter of an inch (0.25 and 0.6 centimeters) was possible across eastern Louisiana, Mississippi, central Tennessee, Kentucky and over into the West Virginia and Ohio border region, Oravec said.

Up to 12 inches (30 centimeters) of snow was expected across parts of the southern Plains into Monday, said Marc Chenard, a meteorologist with the National Weather Service’s Weather Prediction Center.

The region had been gearing up for the winter weather for the better part of the weekend. Texas Gov. Greg Abbott issued a disaster declaration for all of the state’s 254 counties. Abbott, Oklahoma Gov. Kevin Stitt and Arkansas Gov. Asa Hutchinson each activated National Guard units to assist state agencies with tasks including rescuing stranded drivers.

President Joe Biden also declared an emergency in Texas in a statement Sunday night. The declaration is intended to add federal aid to state and local response efforts.

More than 760 flights were canceled at Dallas-Fort Worth International Airport, and at Dallas Love Field most of the nearly 200 flights for Southwest Airlines, the airport’s main carrier, were canceled on Sunday.

American Airlines said about 345 of their flights were canceled at DFW Airport, its hub, by early Sunday afternoon. The airline said the storm was also affecting their flights across the region, with operations reduced and canceled at airports across Texas, Oklahoma and Arkansas.

The National Weather Service said Sunday that the forecast through early Tuesday calls for 8 to 12 inches (20 to 30 centimeters) of snow in central Oklahoma, and 4 to 8 inches (10 to 20 centimeters) in an area extending from eastern Texas to the Ohio Valley in the Northeast.

In Memphis, Tennessee, snow started falling Sunday afternoon, and while main roads were still passable, lines formed during the day at grocery stores as people rushed to stock up.

In Mississippi, sleet in Jackson and other central parts of the state left roads and bridges slick. Bill Parker, a National Weather Service meteorologist in Jackson, said up to three-quarters of an inch (2 centimeters) of ice could accumulate in central Mississippi, bringing the possibility of power outages or falling tree limbs.

Parts of Kentucky and West Virginia still recovering from an ice storm last week are expected to get up to a quarter-inch (0.6 centimeters) of ice or up to 8 inches (20 centimeters) of snow by Tuesday.

Meanwhile, in the Pacific Northwest, tens of thousands of people were without power after a winter storm blanketed the region with ice and snow and made travel treacherous.

“It is icy and snowing and they’re calling for more snow,” Cheri Kirkman said.

Despite the weather, she said they still had some people coming in to pick up gifts. “We’ve got plenty all made up, ready to go,” Kirkman said.