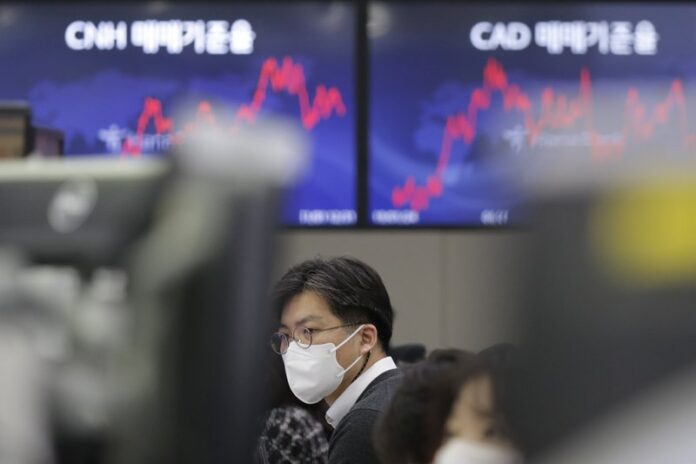 NEW YORK (AP) — Major indexes opened lower on Wall Street Friday, while shares of GameStop, AMC and several other stocks being targeted by a rowdy community of amateur investors soared again in more volatile trading. The S&P 500 index fell 0.7% in the early going. The frenzied trading in those stocks has drawn increasingly loud calls on Capitol Hill and elsewhere for regulators to step in. The Securites and Exchange Commission said it was closely evaluating the “extreme price volatility” in certain stocks. Shares of Novavax soared after the company reported positive results from a British study of its vaccine candidate. Treasury yields rose.

THIS IS A BREAKING NEWS UPDATE. AP’s earlier story follows below.

Markets in London, Paris and Frankfurt all dropped 1% or more while the Tokyo exchange saw a nearly 2% decline. Futures for U.S. indexes fell further after Johnson & Johnson released results showing its one-shot vaccine protected against COVID-19 though it wasn’t as strong as some two-shot rivals.

“We are still moving towards a recovery from the pandemic, just a heck of a lot bumpier than anyone had expected,” said Stephen Innes of Axi in a report.

On Wall Street, the future for the Dow Jones Industrial Average was off about 1% while the S&P 500 future showed a decline of 0.8%.

On Wall Street, the S&P 500 on Thursday rose out of the red for the year as investors watched wild swings in GameStop, which skidded 44.3%. Cinema chain AMC and other stocks that have become targets for online traders also gyrated.

Several fell after Robinhood and other trading platforms restricted trading, causing an outcry by some customers. Robinhood has restored some trading in the shares Friday, which has prompted their gains in the premarket.

After trading closed, the Hong Kong government announced preliminary estimates showed the territory’s economy contracted by 6.1% in 2020. It said output fell 3% in the final quarter compared with a year earlier.

In Tokyo, the Nikkei 225 in Tokyo shed 1.9% to 27,663.39 after the government reported December factory output fell 1.6% from the previous month in the second straight decline.

In energy markets, benchmark U.S. crude rose 35 cents to $52.69 per barrel in electronic trading on the New York Mercantile Exchange. Brent crude, the price standard for international oils, shed 6 cents to $55.04 per barrel in London.

3 dead in what appears to be a drug-related shooting at Old Elm Hill...