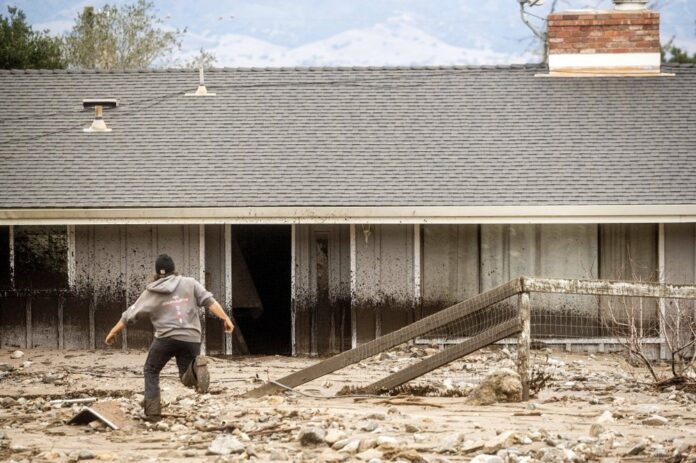 After barreling ashore in Northern California, the storm took aim like a massive firehose at the central coast, where the two-day rainfall total neared 14 inches (35.5 centimeters) in San Luis Obispo County, the National Weather Service said.

The system then dropped into Southern California, bringing threats of flash floods and debris flows to areas scorched by recent blazes.

About 8,200 people were under orders to evacuate foothill neighborhoods beneath the burn scar of last summer’s El Dorado Fire near Yucaipa. Deputies went door to door urging people to leave in the Oak Glen area.

“We’ve given an evacuation order. You need to heed it,” San Bernardino County Fire Division Chief Grant Malinowski said during a news conference. “Don’t wait, do it now.”

In the Eastern Sierra, Mammoth Mountain ski resort reported 7.25 feet (2.21 meters) of new snow on its summit. A blizzard warning remained in effect for the range on both sides of the California-Nevada border.

The California Highway Patrol closed a 75-mile (120-kilometer) stretch of Interstate 80 following multiple spinouts along the key route east of Sacramento to the Nevada border west of Reno. No injuries were reported. U.S. Highway 395 remained closed from near Bishop north to the California-Nevada border.

“I would not venture into the Sierra if you don’t have to.” National Weather Service meteorologist Alex Hoon in Reno tweeted.

Firefighters northwest of Lake Tahoe rescued a 14-year-old boy who was buried under 5 feet (1.5 meters) of snow that slid from the roof of his home Wednesday night. He wasn’t seriously injured. The Truckee Fire Protection District said the teen was playing in a snow cave in the Serene Lakes area at the time.

In the San Francisco Bay Area, Northern California, a horse, Staredown, died during training Thursday at Golden Gate Fields in Albany. A necropsy will determine the cause of death but the California Horse Racing Board noted that more than an inch of rain had fallen at the racetrack.

Atmospheric rivers are long, narrow bands of water vapor that form over an ocean and flow through the sky. They occur globally but are especially significant on the West Coast of the United States, where they create 30% to 50% of annual precipitation and are linked to water supply and problems such as flooding and mudslides, according to the National Oceanic and Atmospheric Administration.

Scenic Highway 1 was closed near Big Sur after a section of the roadway collapsed when the cliffside below gave way amid torrential rain. Big Sur Fire said there was no estimate when the key coastal route would reopen.

Mudslides near Salinas south of the San Francisco Bay Area damaged about two dozen rural ranch homes beneath hillsides scorched by the River Fire last August. One woman was treated for broken bones after mud went through a house. Fifty horses were rescued.

Flash-flood watches remained in effect through Thursday afternoon for a wide area encircling the San Francisco Bay Area. In Santa Cruz County, evacuation orders for about 5,000 people were downgraded to a warning, meaning people should be ready to go.

Pacific Gas & Electric was working to restore power after reconnecting about 75% of the 575,000 customers who lost electricity Tuesday and Wednesday.

About 1,000 homes and businesses were without electricity in northern Nevada, where the effects of the storm also forced school closures in several counties.

The atmospheric river is part of a major change in weather for California, which had significant drought conditions for months. The dryness contributed to wildfires that scorched more than 4.2 million acres (17,000 square kilometers) in 2020, the most in recorded modern history.

Made for more: Local woman helps hundreds across the country lose weight

4 dead, 3 injured in a crash in South Miami Dade