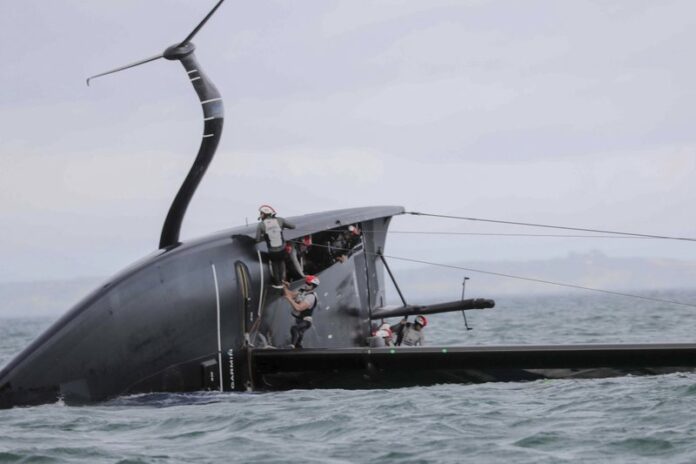 Patriot was slowly lowered into the water at the team’s Auckland base and was expected to sail later in the day to begin systems checks — the first step to a full return to racing.

On its relaunch, Patriot had a new emblem over the area of the bow which had been holed — crossed band aids bearing the Italian, British and New Zealand flags and the message: “thankyou.”

American Magic tweeted a picture of the new emblem and said “after 9 days of round-the-clock effort, and the massive support of so many here in Auckland, back home and around the world, PATRIOT is back in her natural element.”

“The Prada Cup racecourse awaits her.”

An American Magic spokesperson told reporters “the band-aid graphic with the three flags that covers the repair is an acknowledgement from all of us within the American Magic team of the invaluable assistance received from each of the other three syndicates.”

The 75-foot Patriot has to pass inspection by the Cup measurement committee late Wednesday in order to race against Italian challenger Luna Rossa in the best-of-seven race challenger series semifinals which begin.

The winner of the series will progress to the Prada Cup final where it will meet Britian’s INEOS Team UK. The loser will be out of the regatta.

American Magic’s shore team, assisted by boat builders from America’s Cup-holder Team New Zealand, have been working around the clock since the capsize occurred to repair extensive damage, including a big hole at the bow.

The U.S. yacht sustained internal and external damage and its complex electronic systems have had to be replaced. Patriot’s hydraulics are sealed and avoided the worst of the damage.

The achievement of American Magic in repairing Patriot on such a tight deadline has amazed rival teams and sailing experts. Patriot came close to sinking and was only saved by the swift response of the U.S. team and rivals who rushed to its assistance.

Ben Ainslie, skipper of the British team, wrote in a weekly newspaper column that he doubted his team could have overcome such a setback.

“I asked one of our senior engineers whether we would have been able to make it back for the semifinals had the same thing happened to us and he said ‘no chance,’” Ainslie said.

“We’re reassured by (designer) Silvio (Arrivabene) and the guys that the boat will be in a similar state,” Goodison said.

The Latest: Biden pleads for action on climate in UN speech

40-y Florida teacher in accused of having sex with a teen “many hundreds of...