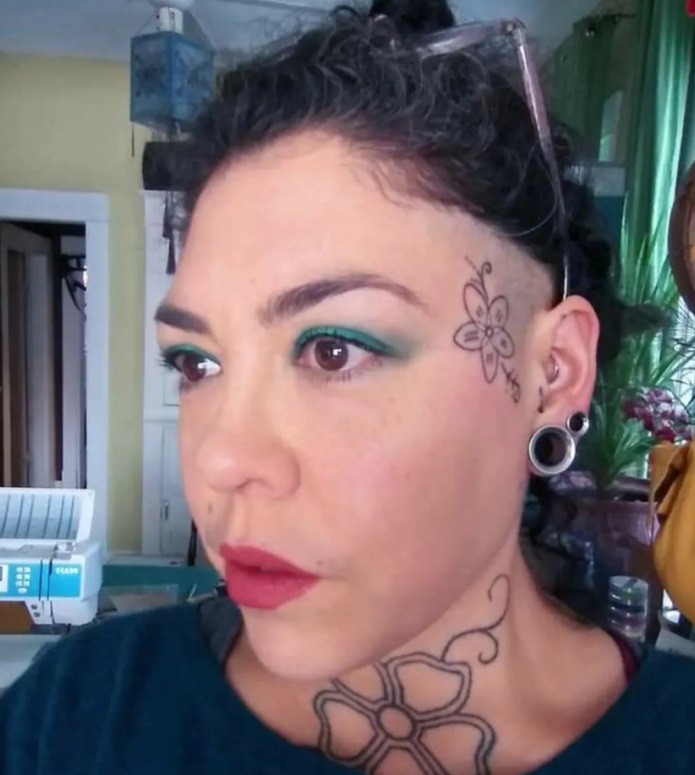 Tattoos are popular for people of all ages and genders — even on the face — but for Indigenous women, it’s not about being trendy.

It’s about reclaiming a traditional form of self-expression.

A few years ago, Stacey Fayant, a Regina artist, decided to explore the art of traditional tattooing because it piqued her interest.

“All my art is centred around my identity and culture and exploring how trauma from colonization has affected our identities,” said Fayant. “I never knew that my people tattooed, so when I found out, there was a real strong pull to find out more about it and I knew I had to be involved in reawakening it here in Saskatchewan.”

Fayant, who is of Cree, Saulteaux and Métis descent, was professionally trained in the stick-and-poke and skin-stitch methods. These two forms of tattooing existed on this continent prior to contact, which is why she wanted to learn these specific techniques.

Initially, Fayant thought she would share her knowledge with just her family, but has been overwhelmed by the response from the Indigenous community. Waiting lists for her tattoos, prior to the pandemic, were at least six months long.

“People seem to know that they need this and it’s for the right reasons,” she said. “They are coming to me specifically for a traditional tattoo that connects them to their identity and their culture.”Fayant said face tattoos such as chin and temple tattoos are not viewed as taboo among Indigenous cultures around the globe, so she’s not surprised Indigenous women are choosing to get such markings.

For Nina Wilson, a Saskatoon resident and co-founder of Idle No More, the decision to get her forehead tattoo seemed natural.

“What I chose to do was permanently mark my face, so I wouldn’t have to keep putting it on and taking it off and putting it on,” said Wilson.

She has recently added a chin tattoo.

Wilson realizes such markings are considered unconventional in today’s society, but says they are rooted in a history older than Canada.

“They are not your average tattoo.They make people stop and stare,” she said.

Wilson believes these ancient markings serve a purpose and has no regrets about getting them. Most times she forgets she has them because they are a part of her now, until she notices the stares or when someone stops her and asks about them.

Wilson said the tattoos are there to remind people of the old customs and rituals, which were deliberately erased through colonialism, so they shouldn’t be feared.

“The way it was explained to me by different ceremonial people, it’s almost like a protection that you wear different,” she said.

Kat Worm, who lives in Punichy, north of Regina, had her own reasons for deciding to get a chin tattoo, and like Wilson, she felt like it was meant to be there.

She waited almost two decades before getting her tattoo last year. Initially, she wanted to get the tattoo after she graduated from university, but at that time face tattoos were rare. Worm did some research, but said there was limited information available.

“I found out that some Cree women did have face tattoos and always below the chin,” said Worm. “I was brought up on the reserve so I was raised always looking at my Indigenous side. So I started looking at my Celtic side and [found out] they would use face paint that also went below the chin.

Born to a Cree father and Irish mother, she embraces both bloodlines equally, so when she did get her tattoo, she wanted it to symbolize that identity and chose to get two parallel lines down her chin.

“Physical appearance is the first thing you notice about somebody, I’ve never been a big makeup person so I think I needed this type of statement for my own individuality,” said Worm.

Although her family supported her decision, the reaction she receives from strangers varies. While many Indigenous women admire her tattoo, strangers in the small town where she lives are more apprehensive toward her now, she said.

Worm takes both reactions in stride because she knows face tattoos can carry a negative stigma for some people.

However, she believes this is not a trend and it will become more common among Indigenous women.For Tasha Beeds, the decision to get a traditional temple tattoo is complex because of what it symbolizes for her.

Beeds is a university professor at two Ontario institutions — the University of Sudbury and the University of Windsor college of law. She is also a water walker. She takes both roles seriously, and they are interwoven in her decision to get a face tattoo.

Water walkers, who are also known as water protectors, are a group of primarily Indigenous women who pray for the health and preservation of water, embarking on walks to do that and celebrate the resource.

Prior to a walk a round Lake Superior in 2017, Beeds had a dream of impending doom. Although frightened, Beeds said, the water spirit she heard in her dream told her she would be helped. “In my dream, she gave me a marking.”

Once the walkers crossed the Canada-U.S., border Beeds fell severely ill and sought medical attention. After a series of tests at hospital in Baraja, Mich., doctors discovered a tumour in the middle of her chest.Although she was both shocked and worried, she remembered her dream. Against the doctors’ advice to go home and seek treatment, she continued the walk.

While on the walk, Beeds and the other women were joined by Indigenous artists Christi Belcourt and Isaac Murdock.

“They were just starting to do the ceremonial tattoos and Isaac was going to have one done and I said, ‘I want one, too, and I shared with them my dream.’ ” Belcourt and Murdock immediately agreed to do the tattoo.

Although it was a painful experience, Beeds said she knows it was meant to be.

Today, she said, her face tattoos spark curious questions from students and she uses those conversations to educate others about the importance of protecting the water. Fayant has also recently added a temple tattoo and like other women with facial markings, she believes they are powerful because they provide a connection to the past.

Cyclist killed after being hit by a car